Q poll: Klein's approval down and the Mayor should share control of the public schools 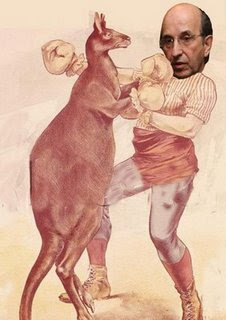 Despite his recent charm offensive, all the millions being spent on ads by the Fund for Public Schools and doled out to community groups and churches by Learn NY, and all the other efforts being made by DOE, Bloomberg, and his billionaire buddies to control the public debate about the results of their chokehold over the public schools, Chancellor Klein’s approval rating continues to fall – 7 points in the last month alone. And even though he often claims to be a civil rights hero, his disapproval ratings are highest among blacks and Hispanics.

parents with children in the system disapprove, by a large margin --54-41%

Overall, voters say should continue mayoral control (53-37), though that figure has dropped by 4 points in the last two months.

In a new question offered by Quinnipiac, voters also say they'd like the Mayor to share control with the City Council (53-37) or the borough presidents (50-41).

In last month’s poll, the pollsters eliminated the question they’d asked for several years about whether voters believed that the Mayor should share power with an Independent Board, even though most respondents had favored that response by a large margin.

Their public explanation? “Independent” was too positive a word.

The new poll is here . See the specific responses about Klein below.

Hmmm...while his approval is down, is it possible it would be even further down without the puppet groups spreading their lies all over the city? Maybe without all those mysterious dollars that came from someone Geoff Canada says is not Bloomberg we'd be looking at the end of mayoral control, or even the inability of Mayor Moneybags to buy that third term. Maybe the voters would have risen up with torches and pitchforks by now, if they hadn't seen those ads.

Just a thought. Also, it's hard to find a pitchfork in the greater NY area, and it's too windy this time of year for torches. I'm thinking we regroup next month, perhaps.