If the budget proposal stands as approved today by the MTA Finance Committee, NYC public school students will be required to pay half fares for their subway and bus transportation to and from school beginning next September, and even that 50% discount will be eliminated beginning in September, 2011. Elements of the MTA's proposal were presented on NY1 today and are now being reported in both the NY Daily News and the NY Times City Room blog. The Daily News reports tonight:

Approximately 555,000 students have received free or discounted Metro Cards in a longstanding program that had been fully funded by the state and city until 1995, when they slashed subsidies.

The state - which had been contributing $45 million a year to the program - reduced its share to $6 million this year, transit officials said.

MTA spokesman Jermey Soffin said no other transit authority in the country covers the cost of students traveling to or from school, and MTA Chief Financial Officer Gary Dellaverson said the state and city reduced free MetroCard subsidies in the 1990s, leaving the MTA to absorb more and more of the tab.

This year, "the state for all intent and purposes has eliminated its contribution to school fares...," Dellaverson said. An MTA budget document says, "The MTA can no longer afford to subsidize this free service." 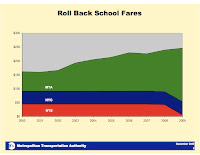 In 2009, NYS radically reduced its contribution to just $6 million (the declining red area), substantially compounding the growing shortfall already being made up by the MTA (the expanding green area) over recent years as can be seen in the graph shown here (covering 2000 - 2009), taken from today's MTA 2010 Budget -- December Financial Plan Presentation. Interestingly, in the same document, another chart projects savings increasing from $31 million in 2010 (students would receive half-fare MetroCards) to $62 million in 2011 (students receive no MetroCards), followed by a jump to $170 million in each of 2012 and 2013.

If things stand as presented, NYC public school parents will be left to fund their children's daily transit to/from school at an approximate cost of $750 per student per year at current fare levels. The burden will obviously fall hardest on those who can least afford it, the many Title I qualifying families in the city. Students will be less likely to choose schools at a commuting distance from their homes, fare-beating incidents and absence/truancy rates will rise, and petty thefts, gang-related activies, and other such problems will increase as more students resort to walking longer distances for lack of train or bus fare.

From the NY Times City Room blog:
Scott Stringer, the Manhattan borough president, sharply denounced the cuts to student discounts. “The fact that you would jeopardize free MetroCards for children to go to school, and put their parents in harm’s way, is something so inexcusable, I had to come here today and tell you, just stop,” Mr. Stringer said in an angry speech before the committee meeting.

Perhaps there's one ray of sunshine in all this: Mayor Bloomberg will no longer have to put up with so many noisy, rowdy schoolchildren on his daily, "See! I really am in touch with the unwashed masses" morning subway ride to City Hall.
Posted by Steve Koss at 12/14/2009 09:19:00 PM

Actually, two SUVs meet Mayor Bloomberg every morning. The subway stop near his residence is not to his liking, so they drive him to a better one.

Thanks for posting this. I hadn't heard it.

Great way to trap poor children in their nearest underperforming school. Even the efforts to provide citywide "high school choice" can't overcome this.

College Term Papers said...
This comment has been removed by a blog administrator.
March 3, 2010 at 6:06 AM

Custom Term Papers said...
This comment has been removed by a blog administrator.
December 1, 2010 at 1:25 AM

Obviously it offers tremendous opportunities on the professional and academic level, and it embraces you from whatever culture you are to work equally as any citizen.

The MTA Finance Committe Approves End to Funding NYC Student MetroCards is really nice thing to get approved by them I think this is really good for the NYC students to get such things for there good and now they needs to study more good.

I am very happy that you launched a new NYC Student MetroCards to help students, I will recommend to my all friends and colleagues for visit this site and I hope you will do these types of great in future.My best wishes always with you.

We must keep funding for our students. We can not keep making is harder for them financially. Good job.

What did you say? NYC public school students will be required to pay half fares for their subway and bus transportation to and from school beginning next September, and even that 50% discount will be eliminated? This is too sad... Maybe our dissertation editing services will be able to provide students with some discounts!