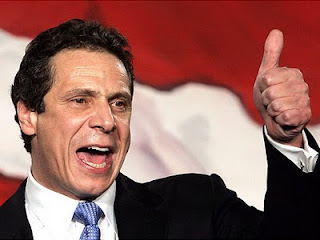 Andrew Cuomo announced for governor this weekend; according to news reports, he decided to support raising the cap on charter schools after he met with the hedge fund operators, and got their promise of contributions to his campaign.


He seems to have completely swallowed the line of the charter school lobby, according to his new campaign document, and implies giving parents a say in co-locations ‘a poison pill”:

I believe public education is the new civil rights battle and I support charter schools.

It’s unbelievable how bad it’s gotten and how much public education has been undermined by the hedge fund privateers, that its considered a positive sign that Robert Duffy, Mayor of Rochester, pro-charter and pro-mayoral control, who is Cuomo’s pick as lieutenant governor, feels as though he must assure parents that their neighborhood schools will not entirely disappear, according to the Gotham Schools:

We will guarantee a place for elementary school children at their nearest neighborhood school, if that is what the family wants. There will be choices of other schools with special programs and services, but every young child will be able to attend a neighborhood school if their parents choose. That will reduce transportation costs.

Some vision of public education!

If you are on Facebook, please friend Cuomo, and then post a comment on his Facebook page, as I have. Urge him to start listening to parents, for a change; not the hedge fund operators.

Ask him to oppose raising the cap on charters without rigorous protections for parent and student rights. And ask him to start paying attention to improvements for our public schools, where the vast majority of our NY students attend. Public school parents may not have millions to contribute to his campaign, unlike the hedge fund operators, but we vote!