Waiting in the rain for Arne: my day with charter parents 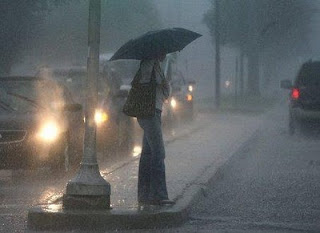 US Education Secretary Arne Duncan came to NYC today, to visit Kings Collegiate Charter School in Brooklyn, one of the chain of Uncommon Schools. He came to pressure our legislators to lift the charter school cap, in return for the possibility of receiving millions in federal Race to the Top funds.

I travelled to Brownsville along with former charter parent Khem Irby of District 13, Leslie-Ann Byfield, a charter parent and advocate, and another charter parent. We wanted to make the point that despite Duncan's claim that he has encountered "zero" opposition to his policies, there are many parents, including charter parents, who feel quite differently.

As I have recently learned, there are many disaffected charter school parents, including those whose children attend Uncommon Schools , who feel that there needs to be far more accountability and protection of parent and student rights before any expansion of charters should be contemplated.

We managed to enter the school easily, along with the mayor's entourage. After going upstairs and waiting for a few minutes outside the classroom where Duncan was supposed to talk to kids, the DOE in the person of David Cantor spotted us and asked us nicely to leave. Though the charter school parents wanted a dialogue with Duncan, Cantor insisted that no questions or discussion would be allowed, even for reporters; and that this visit was only a photo op. We left and waited outside in the rain, patiently, for another half hour or so, until Duncan, along with Klein, Bloomberg, and other top DOE officials exited the school. For what happened next, see our press release below:

That's very difficult moment when you have no car or your car has no gas, damaged, or junked.

Shocking. With all Uncommon has accomplished (read Teach Like a Champion and Driven by Data - two extraordinary books written by their leaders), your only post about them is this flimsy non-story about a 4 person protest. VISIT their schools! See students of color achieving at high levels, teachers that work their tails off and kids behaving themselves. Then go visit MOST other non-charter schools and see the low expectations, the kids playing in class, etc.