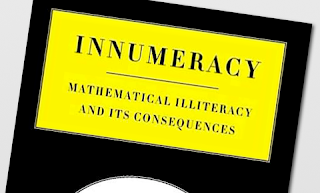 Check out John Allen Paulos in today’s NY Times, author of "Innumeracy", about how the current obsession with data often gives us the wrong answers; and steers us in the wrong direction:

Unless we know how things are counted, we don’t know if it’s wise to count on the numbers … Consider the plan to evaluate the progress of New York City public schools inaugurated by the city a few years ago. While several criteria were used, much of a school’s grade was determined by whether students’ performance on standardized state tests showed annual improvement. This approach risked putting too much weight on essentially random fluctuations and induced schools to focus primarily on the topics on the tests. It also meant that the better schools could receive mediocre grades because they were already performing well and had little room for improvement. Conversely, poor schools could receive high grades by improving just a bit.

We are now entering the fourth year of the Tweed’s inherently flawed school “progress reports” or grading system.
Each year the formula has been significantly revamped because of the absurdity of the previous year’s grades, including this year’s grade inflation, in which 84% of elementary and middle schools got "A’s". If the authors of this system were to receive a grade themselves, it would be an "F".
The school grades are based 85% on the previous year's state test scores, which themselves have been widely derided as unreliable. The formula used has also been shown to unfairly penalize schools with large number of high-need special education students, despite the DOE's claim to fully control for the student population.
And, as Paulos points out, they are essentially "random" as they are based on only one year's worth of test scores.
Yet, inexplicably, the DOE refuses to conform to reason and alter the formula so that it is based on more than one year’s data; despite the fact that Jim Liebman promised at their inception to base them on three years’ worth of test scores.
Other troubling problems related to the way in which the grades also rely in part on survey results from teachers and parents. Recent articles in the Daily News have shown how several principals have pushed teachers into giving them favorable reviews; with the threat that otherwise, DOE may close their schools based on low grades. Parents also commonly report the same sort of pressure, either externally or internally imposed.
The school grading system also ignores critical but highly variable factors that differ widely among schools and yet are largely outside the their control, such as class size or overcrowding, which can work against increases in achievement.
This omission is unjustifiable, given the fact that DOE’s “teacher data reports” that Klein says should be used in tenure decisions include class size as a key factor, showing that even Tweed educrats recognize that class size is an important contributor to teacher effectiveness, and their claims otherwise are so much hogwash.
Yet the teacher data reports are themselves problematic; and their formula has never been publicly released. I submitted a FOIL for the formula more than a year ago, as well as the identity of the “independent” panel that DOE had claimed had attested to its reliability, and have still not received anything in return.
As the National Academy of Sciences has pointed out, in its comments to Secretary Duncan’s misbegotten grant program “Race to the Top”, no system for evaluating teachers on the basis of test scores has yet been established that is ready for prime time, given all the inherently complex and imponderable factors that go into test scores, particularly at the classroom level. Any attempt to implement such a program, they urged, should be carefully tested and independently vetted, because it could very well have unfair and damaging consequences, not just to teachers but to our kids as well.
We have already seen how art, science and music and untested subjects have been minimized in our children’s schools since the over-emphasis on high-stakes tests has been imposed; with weeks more spent on test prep and less on learning.
All parents should closely watch the evolution of the recent agreement between the New York teachers union and the state, to base 25% of teacher evaluation on state test scores and another 15% on “locally selected measures of achievement that are rigorous and comparable across classrooms."
We must hope that whatever formula is used is independently and publicly vetted, does not result in even more unfair and unreliable measures of performance, and does not lead to more testing that will waste time and money, serving no purpose except to diminish the quality of education that our children receive.
You can comment on the US DOE blog about the fallibility of basing teacher evaluation on test scores here.
Posted by Leonie Haimson at 5/16/2010 06:28:00 PM

Do you ever wonder how Bloomberg and Klein can continue to support policies and practices that don't stand up to scrutiny such as Paolos' or yours?

The answer is simple: Under the current charter, no elected City official has the power to get the mayor to modify those policies and practices.

Only the State legislature may be able to change things, and they're sort of preoccupied right now.