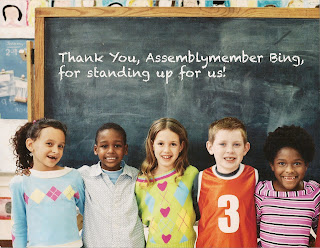 Assemblyman Jonathan's Bing bill to eliminate seniority rights for teachers has not fared so well. His co-sponsor walked away citing the bill's unconstitutionality and one law maker pronounced the bill "dead on arrival". As a parent in his district, I resented the blatant attempt to sell the bill with faux-empowerment of parents. Principals would make unilateral decisions on layoffs after "consulting" with yet another powerless panel of parents and teachers.

But Bing is seeing deep support from one key constituency -- hedge fund moguls. Education Reform Now, a front for four hedge fund operators paid for the mail piece shown here. Hedge fund moguls are pouring money into public school policy debates despite the fact that they would never send their own kids to public schools. We'll be spending some time here on the blog taking a closer look at the hedge fund money, the motivation of the wealthy men behind it and their influence in public education.
Posted by Patrick J. Sullivan at 5/15/2010 08:11:00 PM

Great piece. I am looking forward to reading what you find out. Bing and Diaz don't even fully grasp how layoffs would occur, and yet they're trying to change the law!

I linked this piece over here. Hope you don't mind.

Why should new teachers automatically get the boot and my kids get stuck with a "rubber room" lifer?

What exactly do you know about "rubber room lifers" ? I am a teacher for 20 years and my kids love me. Get your facts straight.

Thank you Mr. Sullivan for supporting us. You are the only one on that panel who makes sense.

Anon 11:04- A "rubber room lifer" (anyone who falls into this category is there because the DOE is dragging its feet, NOT the teacher) would not even be IN the classroom at the moment. I hope you are not one of those people who thinks that all new teachers are great and those of us with experience are not.

I've been teaching for 10 years and I resent the "rubber room lifer" comment. What makes you think all new teachers are great and experienced teachers are terrible?

They're all the same people, folks -- some good, some bad. I know some excellent new teachers, but I also learned from some kick-ass veterans -- and there's evidence to show that experience makes a big difference.

Teaching is exhausting. I work my ass off every day. And I resent people who bad-mouth my profession despite the effort I put into educating their kids.

As a parent I don't think that seniority should be the sole criteria for deciding who stays and who goes. That is all Assemblyman Bing's bill does - allow other criteria to be considered in layoffs. No one is saying seniority shouldn't be considered in whether or not to keep teachers. There are a lot of us who don't think it should be the sole decider which it currently is.

I work in at a unionized company which has gone through layoffs. Despite representations otherwise, the last hired, first fired is a completely arbitrary way to reduce a workforce. While most of the unionized workers I know do a first rate job, I have seen first hand the impact of getting rid of young, promising workers while keep mediocre/bad senior workers.

Point blank - it's not pretty and it's not good.