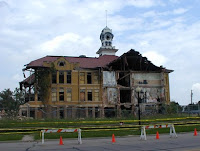 “[We] crisscrossed the country this past summer and team[ed] with local communities to renovate seven rundown schools in Los Angeles and rural Needles, California; Baton Rouge, Louisiana; Nashville and Detroit. Some of these schools hadn’t been maintained for decades, and lacked even basic needs like toilets and working lights….[We] were humbled by the overwhelming community support we found throughout our journey as we poured millions of dollars into new school facilities. With the help of our sponsors…we helped these seven worn-out schools once again stand tall.”

Sounds like a great story, a program reminiscent of President Carter’s Habitat for Humanity. Who wouldn’t want to see charitable efforts like this going to help out communities and their schools during tough economic times? Almost brings a tear to the eye.

The individual quoted above is Jacob Soboroff, posing as an “education contributor” in yesterday’s HuffingtonPost. In point of fact, HuffPost has given him a nice featured space for free advertising. Mr. Soboroff is identified as the Co-Host of NBC’s upcoming new reality show, “School Pride.” That’s right, it’s a show perfectly attuned to NBC’s increasingly absurd “Education Nation” concept, one in which NBC and its “sponsors” helicopter into certain perilously ravaged school districts in order to save the local community by refurbishing or rebuilding one of their schools.

Mr. Soboroff’s HuffPost biography says he is “part of the team working to transform America’s education system” and describes him as a former “advance man” for Michael Bloomberg. His website adds that he and his co-hosts are doing this in order to “put a spotlight on the importance of education.” Something like “The Biggest Loser” puts a spotlight on the importance of weight control, apparently.

It hasn’t been bad enough to turn house building for unfortunate people into “feel good” entertainment for couch potatoes, or to watch horribly overweight people become “heroes” in their struggle to save themselves from early death. Now we get to watch the salvaging of children’s education as entertainment, with the help of the show’s “sponsors.” You can bet there’ll be no shortage of outrage at how “they” (the politicians? The unions?) ever let the schools get to this condition, and plenty of tears shed in gratitude for NBC’s deus ex machina beneficence.

The intention is just fine -- who could possibly oppose seeing a decrepit school building restored and modernized -- but the approach is (for me, at least) sickening. The Jewish philosopher Maimonides once explained that an anonymous gift is “’a commandment fulfilled for its own sake,’ rather than one done in order to obtain honor.” He doubtless could never have imagined that acts of charity could be performed in order to entertain the masses and make a profit.

Forgot to watch it. Please keep me posted about reruns so I can forget to watch it again. I'd only think of the 99.999% of public schools getting no support or attention whatsoever.