Another Unintended Consequence of School Accountability 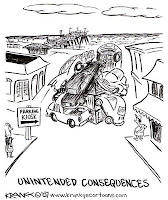 The negative effects of standardized-exam-based school accountability, what might be gently termed unintended consequences if they weren't both so nefarious and so plainly evident as to think they might indeed not be unintended, are almost too numerous to count:

-- Narrowing of the classroom curriculum to the accountable (i.e., tested) subject areas;
-- Reduction in time spent on art, music, gym, and even the sciences;
-- Teaching to the test;
-- Reduced time spent on teaching approaches that foster depth of exploration, creativity, passion, inquisitiveness, etc., and that deaden education or the notion of knowledge for knowledge's sake;
-- Repetitive practice testing that further reduce children's interest in school and education;
-- Increased test pressure and anxiety among young children;
-- Focus on "bubble children" with attendant loss of attention to high-end and low-end performers;
-- Improper coaching and outright cheating by teachers and/or school administrators;
-- Reclassifying low achievers as learning disabled so their scores will not count against the school;
-- Altering school nutrition programs on testing days (evidence for this was found in Virginia) to increase the likelihood students would do well on the exams;
-- Suspension of low achievers during the test cycle to alter favorably the school's testing pool.

As if all of those were not reason enough to question whether the negative effects of school accountability outweigh the positive ones (if any such exist), a June 2010 study (viewable as HTML here and downloadable as a .pdf by searching on "Figlio accountability teacher mobility") from the Urban Institute and the National Center for Analysis of Longitudinal Data in Education Research (CALDER) has shed light on yet another negative impact of accountability: teachers fleeing schools with failing letter grades.

Based on data at the student and teacher level from Florida since 2002, where accountability systems include letter grades for schools ranging from "A" to "F," researchers Li Feng, David Figlio, and Tim Sass analyzed the impact of a sudden change (in 2002) in Florida's criteria for school assessment that resulted in roughly half of the state's schools receiving what they term an "accountability shock," a grade either higher or lower than they would have received under the pre-2000 school assessment criteria. What they found speaks volumes regarding what state school administrations might term self-fulfilling prophecies:

"Teachers in schools who unexpectedly receive a grade of "F" are over 40 percent more likely to leave their school and are nearly 70 percent more likely to move to another school in the same district than are teachers in schools that did not receive an accountability shock." They also found that "...downward accountability shocks lead to an increase in the quality of teachers who leave."

In other words, teachers whose schools received an "F" saw the handwriting on the wall and began bailing out at a statistically significantly (at the 99.99% level) higher rate of turnover than at other schools, even those unexpectedly downgraded to a "D." Furthermore, the quality of the teachers who moved was higher than the general level of teachers who moved from/to other parts of the system. An "F' grade triggered teacher departure, more likely by the better teachers in those schools as measured, regrettably, by the results of those same standardized exams. Thus, a self-fulfilling prophecy: bad school, high teacher turnover, good teachers leaving = worse school, and the cycle is primed to spiral toward closure short of a major intervention.

Li, Figlio, and Sass do not address whether the impact of school accountability on curriculum -- the restrictions on their classroom creativity and teaching styles and the deadening and demeaning focus on drill and test prep -- add further to teacher mobility or departure from the profession altogether. However, their conclusions certainly confirm what intuition would suggest. That's one reason why major corporations facing bankruptcy or even merger will often pay bonuses or premiums to employees who are willing to stay thorough to the end of those processes.

Given the growing list of the negative effects of school accountability, both anecdotal and research-based, one might think that those responsible for these policies would take a step back, pause for a reassessment. But perhaps all of this is nothing more than a bit of acceptable collateral damage resulting from another agenda.
Posted by Steve Koss at 10/16/2010 09:52:00 AM

Given all the evidence of the harm done by the "accountability movement," I think it is safe to conclude that Bloomberg, Obama, Klein, Rhee, Gates, Broad, et al. are NOT interested in improving education.

they are interesting in destroying what little remains of the current system (and after four - yes, four! NYCDOE reorganizations, there is little left here in NYC) and building a system that will look like KIPP - 10 hour school days, extended school year, Saturday school, a deunionized teacher corps, high teacher turnover, top-heavy management (with lots of salaries for those positions), but low pay relative to the amount of work required for teachers.

Socializing future generations to expect to work 10 hours a day, all year long, for little money, with no job protections, subject to the whim of their corporate overlords, that's what the education reform agenda is.

And of course they promote all the technology stuff too because they know that decreases intellectual and emotional consciousness, the ability to think critically, to communicate with peers, to grow and mature socially.

What better way to reintroduce serfdom to the world than to dumb people down intellectually and socially and drain them spiritually and emotionally?

And the irony, of course, is that they say they are the ones fighting for people's "civil rights."

Great post Steve, you are totally right in pointing out the unintended consequences of "exam-based school accountability" - they are too numerous to count and creating exponential problems in education.

I am saddened the most by the fact that teaching approaches that "foster depth of exploration, creativity, passion, inquisitiveness, etc., and that deaden education or the notion of knowledge for knowledge's sake" are some of the collateral damage by such an emphasis on test scores. Teachers who are innovative, embrace the passions and interests of their students, and seize upon teachable moments in the school day are victims, but the ultimate victims are students.

"Thus, a self-fulfilling prophecy: bad school, high teacher turnover, good teachers leaving = worse school, and the cycle is primed to spiral toward closure short of a major intervention." So true. Up here in Canada, we do not face such high emphasis on testing and performance - tests in grade 3, 6, 9 and 12 only. While these scores can be sometimes overemphasized, I do get a sense - mostly - that there is a realization that authentic assessments are best, that these tests are limited to few grade levels because we don't want to overemphasize them.

Do you think that a balanced approach is possible? I can see the side that education is one of government's biggest expense and do feel that there needs to be some sort of accountability or inquiry into "results," however I far more appreciate the approach of my provincial gov't. Your thoughts?

Why do you think these consequences are unintended?

reality-based educator: Do you really believe their agenda is "socializing future generations to expect to work 10 hours a day, all year long, for little money, with no job protections."

I understand that what's being done is not helpful at all for students, but I'm afraid that when educators make such statements it makes us sound a little crazy, and we often lose our audience as a result.

Ms. Tsouris (I LOVE that choice of identity-name!!):

I believe I suggested as much (or at least was trying to) in the closing sentence of my posting. In point of fact, I happen to believe that all these problems really are perceived as necessary (perhaps even unfortunate) collateral damage necessitated by the perpetrators of this ideologically (or economically) driven agenda.

Where it comes from Gates, Walton, Broad, Scaife, Koch, and the hedge fund billionaires, I think I get it. Where it comes from Barack Obama, I am completely at a loss for words. I honestly think he may simply have no real appreciation for the chaos and miseducation he is causing.

There I times when I wish the President would come to NYC and sit down for two hours with Diane Ravitch, Leonie Haimson, Lisa Donlan, Mona Davids, Norm Scott, Jennifer Jennings, and a selected few others and just shut up and listen.

Thanks, Steve. I know a couple of the aforementioned activists and other very articulate educators. Leaving real educators out of the conversation is (to me) an obvious tribute to our increasingly oligarchic government. Reflective Educator, you have to look beyond RBE's words. There is more than a kernel of truth to RBE's take on the agenda of the corporate "educators" who are, indeed, grooming children to be drones and non thinkers who do not analyze or engage in critical thought. They will blindly follow orders. RBE's statement doesn't sound in the least bit crazy. Scratch the surface and look at how the banks have co opted our monies and the way our very government operates. Apparently the middle class does NOT fall into the category "Too big to fail". Only banks and corporations appear to be in that category.