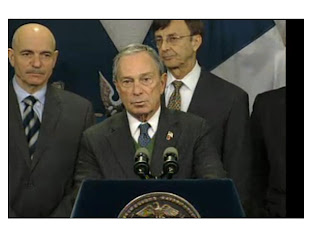 Is the mayor guilty of a double standard, as he defends the performance of the sanitation workers and fire department, whose ability to fulfill their duties were hampered by the blizzard, and yet he continues to blame teachers for conditions out of their control, and is pushing to release the unreliable teacher data reports? Lynne Winderbaum makes the case.

No one should say that our mayor is not understanding of how unique challenges can affect the statistical measurement of one’s job performance. And so it was that I listened to Mayor Bloomberg explain with a bit of impatience and annoyance that the city’s performance in the wake of the snowstorm was not up to par because of a series of unique challenges.

He begged for understanding because, you see, there were a large number of city agencies and personnel involved, there were near white-out conditions, and hundreds of city buses and dozens of ambulances were stuck in the snow.

But the mayor should be aware that all that matters is the outcome, not the difficulties inherent to the job. The data shows that the average response time to structural fires in 2008 was four minutes 33 seconds. The average response time for medical emergencies in 2008 was four minutes 30 seconds. However, in this case, data released today show that the Fire Department had a 3-hour delay in response to critical cases, like heart attacks, and 12-hour delays for non-critical calls. A five alarm fire in Elmhurst raged for 3 hours when firefighters were delayed by the blizzard conditions.

Surely, firemen and EMT’s are to be judged “ineffective” when it comes to a response time so far below the city standard.

Extraordinary challenges notwithstanding, emergency responses to all calls should be within five minutes. It is incumbent on the news organizations, for the sake of our citizens, to FOIL a list of all firemen and EMT’s that were on duty during this time period and to identify them by name in the newspapers. The mere fact that response time data was influenced by so many factors beyond their control, as detailed by the mayor above, is no excuse to fail to reach or exceed the standard of response time expected by the city. It is also unfounded to excuse the longer response times from any engine companies who were impacted by the increased demands created by the closure of firehouses in their neighborhoods.

It is commendable that the FDNY receives the gratitude of the citizenry and the satisfaction of knowing they have saved lives and property. But these things are not measurable as are response times.

Perhaps there should be merit bonuses for the fastest responders to ensure that firefighters show more dedication to their work and our citizens’ welfare. Those who take on the most challenging conditions are no exception. Data is king and the statistics are the only objective way to measure the value of the workers.

It is incomprehensible that in the face of this disappointing data the mayor would excuse FDNY performance by saying, ““And I want them to know that we do appreciate the severity of these conditions they face, and that the bottom line is we are doing everything we possibly can, and pulling every resource from every possible place to meet the unique challenges…”

Oh wait. Nobody wants to privatize the Fire Department or find reason for it to be run by corporate interests who have scant experience improving performance in fire and medical emergencies. Never mind. -- Lynne Winderbaum, retired teacher

No holds bar on Lynne telling the truth! Her post should be sent to the NY Times. Thank you Lynne

Bloomberg's business model failed the last city he tried it in, too

Excellent post.The real issue is Bloomberg is only trying to save money by going out with the old and bringing in the new.That is the reason he keeps recruiting new teachers,paying for their training and offering rent stipends while classrooms are ridiculously crowded.Check recruiting efforts at nyc/gov.