Joel Klein, lousy manager from the beginning to the end 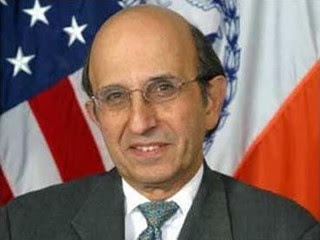 See this article in Capital about what a bad manager Joel Klein was...with lots of stories of screaming fights at Tweed.

It might make good gossip, but anyone paying any attention to our schools has known for a long time that Klein was a terrible manager, though the mainstream media seems to have paid little attention before now. The theory floated in the article is that everything was better before Kristen Kane left in 2007.

When [Kane] she left in 2007, Klein filled her position of chief operating officer, but no one took over her managerial responsibilities and the department suffered for it, a former official said.

“There really never was any high-level management coming out of Joel’s office without her, and certainly, she was never replaced,” said a former DOE official.

(Photo Anagnostopoulos replaced Kane as COO, though strangely, her name is never mentioned in the article. Photo is also the only top level DOE official to have quit, at least so far, since Cathie Black's appointment was announced, and clearly, someone wants to make her the scapegoat.)

Yet the reality is that Klein made one management blunder after another, long before Kane left. As soon as he dissolved the school districts, supposedly to save money but really to grab more power for himself, the whole thing fell apart.

Those of us who were around in the early years still remember the huge budget overruns at DOE, the whole special education mess when kids went two years without referrals and services, the Diana Lam horror show, the reading curriculum fiasco, and don't forget the bus route reorganization that left kids having to cross highways and shivering in the street in the middle of winter. This very visible indication of Klein's heedless mismanagement took place in February 2007 -- nearly a full year before Kane resigned in December 2007.

In fact, Klein mismanaged the department consistently from the moment he stepped into the job till the moment he left. For those whose memory is short or weren't there at the time, they really should read our book, NYC Schools under Bloomberg and Klein.

The funniest moment of the more recent Cathie Black brouhaha was when Kathy Wylde, head of the NYC Partnership and inveterate Joel Klein booster, defended the appointment by saying,

“Many members of the school community have spent the last several years complaining about how badly managed the school system was,” Ms. Wylde said. “If anything else, this shows the mayor was listening, and he went after a manager.”

Of course, she had never admitted this publicly before.