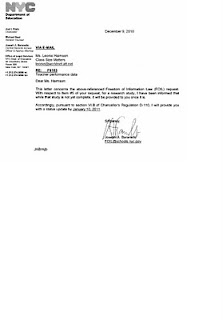 Yesterday in court, the United Federation of Teachers argued that the DOE should not release the teacher data reports to the public, despite FOIL requests from media outlets, because the value-added methodology on which they are based are statistically unreliable, among other reasons, a point also made by many researchers, including Sean Corcoran of NYU. (See articles about the court case in today's Gotham Schools, NY1, Daily News, NY Times, and Post)


In February 2009, almost two years ago, I submitted a FOIL request to DOE for a number of items related to these reports, including the supposed "panel of technical experts" who had approved the DOE's methodology, according to the statement in the 2008 document, “Teacher Data Initiative: Support for Schools; Frequently Asked Questions":
“A panel of technical experts has approved the DOE’s value-added methodology. The DOE’s model has met recognized standards for demonstrating validity and reliability.”
When the FOIL was partially responded to fifteen months later, DOE admitted that this expert panel had not actually approved its methodology, and sent me a report in which the panel expressed grave doubts about its reliability.

Juan Gonzalez of the Daily News wrote about this here; I wrote about it and provided back up documentation here.
In its 2008 FAQ, DOE had also claimed that there was a research study that confirmed their approach:

“Teachers’ Value-Added scores from the model are positively correlated with both School Progress Report scores and principals’ perceptions of teachers’ effectiveness, as measured by a research study conducted during the pilot of this initiative.”

In February 2009, I also asked for a copy this "research study." Coincidentally,I just received yet another email from DOE today, informing me that this study is still not complete, more than two years after the above claim was made, and nearly two years since I filed my original FOIL. (see letter above).
Posted by Leonie Haimson at 12/09/2010 04:33:00 PM

Leonie, the UFT should call you as a witness in the current case. Has anyone even asked you for your documents or consulted you concerning this lawsuit? If no, they should! Wake up UFT.. Leonie is doing a better job at protecting our schools, teachers and students then you and your overpaid staff are!