Big cuts in new seats, despite overcrowding crisis, with DOE spinning as a "restoration"

See this DOE press release on their “new” revised amended five year capital plan, which they try to spin as a major restoration, but is real 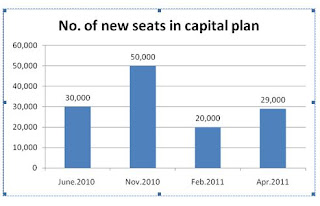 What kind of thinking leads to such erratic, and inexplicable lurches in one direction to another? Is there something toxic in the air at Tweed?


What happened since? Did the state change their reimbursement formula or amount? No.

Did the city’s financial picture significantly change since November? No.

Did enrollment suddenly decline? No.

Did the DOE change their projections based on the fact that now, ONE QUARTER of all elementary schools now have waiting lists for Kindergarten? Unlikely.

Or maybe they just want to spend billions of dollars on technology, so kids don’t ever have to have a seat in a real school but can stay at home and get “virtual learning” instead?