What will Black's departure mean for our schools, and my most unfavorite memory of Dennis Walcott 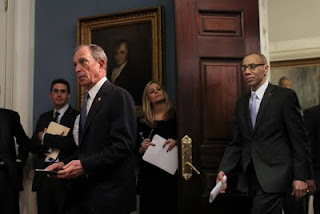 I have mixed reactions to Cathie Black’s resignation. Though friends and colleagues from around the country emailed and called to say that I must be celebrating, I had to respond.... not exactly.

Most parents realized immediately that she was not qualified for the job, although it took the mayor three months of sinking approval ratings for him to appreciate that fact. When he saw the latest polls, with Black approval ratings at 17% and his handling of schools not much higher at 27%, despite millions of dollars spent of ads trying to convince New Yorkers otherwise, he must have figured out it was time to cut bait.

Clearly, Dennis Walcott has far more experience in public education that she did. But watching Walcott in action for the last nine years, I have no evidence that he is ready to take our schools in a new direction. He can hit the ground running; but will it be in the right direction?

We are also furious at the mayor’s proposal to cut 6,000 additional teaching positions, instead of cutting the bureaucracy, wasteful consultants and contractors, or raising taxes on millionaires. We are tired of having our views ignored and disrespected by educrats who think they know better than we do about what’s right for our kids.

I remember when the mayor decided to ban all cell phones from schools a few years back. Most parents felt then and still feel that cell phones are a necessary safety device, especially considering how many of our children are forced to commute miles to school each day. Of course, not a single private school in the city, including the school that the mayor's own daughters attended, would dare ban students from carrying cell phones.

The City Council proposed legislation that would allow students to bring their cell phones to school, which then the school could store for them, but would have to give back at the end of the day. This seemed to be reasonable compromise, given the mayor's insistence that cell phones disrupted classroom activities.

Dennis Walcott testified during the hearings, as Deputy Mayor, and said that it didn’t matter one iota if the Council passed this legislation , since the mayor did not intend to comply with the law. Robert Jackson, chair of the Council Education committee, pointed to a high school students watching from the gallery, and said, “This is terrible example of democracy for these students, the fact that you would calmly say that the city does not intend to follow the law.”

Walcott replied that “No, this is democracy because we are having this discussion.”

In short, unless Walcott (and the Mayor) change course, show that they are willing to follow the law, listen to parents and other stakeholders, and alter the policies that are damaging our kids, I don't believe that our attitudes towards this administration or the mayor’s approval ratings will increase substantially.

Also: see my contribution to the NY Times blog on what Black’s brief tenure reveals about whether business success is enough to run a school system. Please take a look and leave a comment! I was also quoted in the Los Angeles Times, Gabe Pressman’s column and DNA info.
Posted by Leonie Haimson at 4/09/2011 06:26:00 PM

read this newest blog about kids here and reading and Cathy Black: