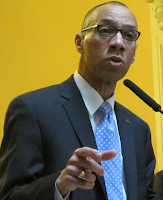 April 7, 2011 (GBN News): In another surprise announcement, Dennis Walcott resigned today, just hours after being named NY City Schools Chancellor. After a ten second nationwide search, Mayor Bloomberg has named Fox News personality Glenn Beck to replace him. No reason was given for Mr. Walcott’s move. However, the sudden resignation is in keeping with a growing tradition among NY City Schools Chancellors.

The choice of Mr. Beck is widely seen as an effort to curry favor with Governor Andrew Cuomo, another Tea Party favorite. But the Mayor, at a City Hall news conference, insisted that Mr. Beck “will bring real scholarship to the city school system”. Mr. Bloomberg noted that the new Chancellor “even has a university named after him”, though he failed to mention that it was Mr. Beck who named his on-line re-education program after himself.

It is unclear just how long Mr. Beck will be allowed to stay in the position. Mayor Bloomberg is said to feel that by hiring “temps” as Chancellor, he can avoid the embarrassing poll numbers that plagued Ms. Black. But Mr. Beck told GBN News that he would like to be remembered as “the longest serving Schools Chancellor since Cathie Black”. This would preclude any resignation announcement before 3 PM Friday.

don't give them ny ideas.

What does the Chancellor really do to improve education in the NYC schools?I have been teaching our children for forty years and have yet to see any of the Chancellor's I have served under do anything to improve my student's learning.
Maybe we should stop talking about raising standards,whatever that means, and preparing every student for college and start thinking about making our schools worthwhile, by teaching meaningful lifelong skills to those children who will never be college material.