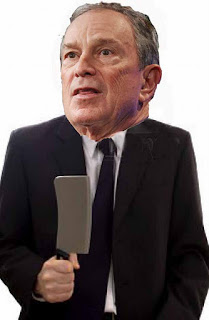 There's horrific news in today's Daily News: that NY State Education Commissioner King is likely to approve the mayor's proposal to fire half of all of  teachers at 33 struggling schools:"That's a pretty aggressive teacher evaluation system,” the state insider said. “We believe the switch meets all the federal requirements.”
Firing a fixed and arbitrary quota of  at least half of all teachers, regardless of their ability, is not a real teacher evaluation system; it's a meat cleaver approach. This proposal reveals Bloomberg's phony hypocrisy and any supporter who  claims to care about the importance of "teacher quality."

Moreover, the city is supposedly intent on pushing through this plan so they can get $60M in federal School Improvement Grants, but as more than 1700 teachers are involved, this will likely double the Absent Teacher Reserve pool and cost the city more than $100M, according to the Daily News.

And the mayor's pointless proposal for merit pay  -- to give $20,000 raises to those teachers rated "highly effective" -- which  has not worked anywhere it has been tried , including NYC, to improve student outcomes?  The Daily News estimates this would cost about $250M per year, for a total of $350M.

In contrast, DOE estimated in 2009 that it would cost about the same amount ($358 million) to reduce average class sizes across the system to the state-mandated goals of 20 students per class in K-3; 23 in 4-8 grade and 25 in HS.  Instead, class sizes have increased every year for the last four.

If they do manage to fund these new proposals, with a static overall education budget, this would probably require even more cuts in staffing, which will mean even larger classes in the future. In contrast, class size reduction is a program that has been proven to work through rigorous evidence, according to the federal government, and is the highest priority of NYC parents every year in the DOE's own surveys, but no; Bloomberg and his cronies would rather scapegoat teachers, fire as many as possible, and waste taxpayer money on policies that have been proven to fail.

Meanwhile, the NY Times runs an editorial approving the mayor's  proposals, the link to which Deputy Mayor Howard Wolfson tweeted to Diane Ravitch, Randi Weingarten, Patrick Sullivan and me last night.  (Way to go, Howard! Glad you're thinking of us  at 11:26 PM on a Friday night!)

The Times opines that the UFT "should meet Mr. Bloomberg’s challenge to help create a fair system for evaluating teachers to be used in providing extra pay as well as to claim more than $60 million in federal education funds that depend on having an evaluation plan in place."

I agree that would be a good goal. Only the mayor doesn't want a fair teacher evaluation system, he wants one that is based solely upon the views of principals  -- with no possible appeal to a more objective party, despite the fact that many NYC principals have been found to base their teacher ratings upon personal grudges and worse, and yet been kept on the job by DOE.

Moreover, built into the NYC school funding system is a poison pill called "fair student funding," which means that principals have to pay the full salaries of their teachers out of their individual school budgets,  which acts as a built-in incentive for them to fire experienced teachers to save money, especially as  budgets have been cut back harshly -- by about 14% -- over the last several years.

Our only hope is that these blustering and wasteful ideas will bite the dust, which has occurred to many of  Bloomberg's proposals in previous State of the City addresses  As the scorecard of New York Times reporter Fernanda Santos' reveals, very few of his promises have come to pass.

For example, in 2005, while running for re-election, Bloomberg promised to reduce class size in grades K-3 (which are now the largest in 11 years), and to "eliminate all pockets of overcrowding" in schools (last year there were waiting lists in one fourth of all elementary schools.) Other proposals, like increasing parent involvement while wreaking scorn upon them and disempowering them in every way imaginable, have died a similar, lonely death.  Let's hope a similar fate meets his latest, most reckless and wasteful education ideas ever.
Posted by Leonie Haimson at 1/14/2012 12:59:00 PM

This has always been about labor practices - specifically giving the city the right to fire any teacher at any time for any reason.

You can bet if the NYSED gives Bloomberg the green light to close those 33 schools and send 1700 teachers to the ATR pool, we will again see a concerted p.r. effort from the mayor and his reform allies at the think tanks, foundations and media outlets that its time to drain that pool by firing everybody who cannot get a job within a set amount of time.

And as you point out, with the Fair Funding System in place, principals are NOT going to hire veteran teachers ever.

Not with the budget cuts the way they are.

So any vet who gets let go is never going to get hired at another school and it is in the interest of every principal to evaluate veteran teachers as "ineffective" so that they can save money in their budgets.

The fix is in.

Howard Wolfson can send midnight tweets about the Times editorial all he wants to try and prove his boss is right on this - he knows the Times people, like the Murdoch people and the Zuckerman people, are ALL on the same side of this labor issue - give the city and the state the right to fire any teacher at any time for any reason.

When you look at the labor practices of the papers themselves, it's not difficult to see why they have the stance on the education that they have.

That's what this is about.

I agree w/ most of what you say, reality-based, but the merit pay proposal is extremely expensive any way you slice it and will not lower costs in any way, any how. They generally do want to squeeze the budgets but at the same time make extremely expensive -- and wasteful -- proposals that will cost millions.

I see what you're saying about the merit pay proposal and what it will cost.

Perhaps this is a case of free market ideology trumping sense.

Or perhaps they want to move forward with merit pay in order to put into place the precedent that in order to get a salary increase, teachers have to show they have increased test scores (or grad rates or some other measure of "effectiveness.")

Under the current contract, steps and differentials and longevity still count.

I suspect in the next contract, the city will attempt to dispense with those completely and move toward a base + bonus system.

It's possible they'll try this with private money first, used as a "bonus", gin up some positive p.r. on the program, then move to put that system in place in the next contract negotiation over the current pay structure.

It costs more in the beginning, but ultimately once they get rid of steps, differentials and longevity and replace them with a base + bonu system, they save money.

Mayor Bloomberg throws out these proposals to cover up the fact his educational policies have been a complete disaster and has destroyed the system.He and his friends in the print media has chosen to make the teachers and their union the scapegoat for the destruction of the system.They never give you policies to improve the system,but always insist on closing schools,more space for his friend's charters, and dismissing teachers.To give principals the right to arbitrary dismiss teachers will take away all teacher's rights won under the existing contract. The principal can now threaten teachers and do what they wish.
Merit pay will pit teacher against teacher in an effort to get more money and hurt the children even more as teachers will no longer help each other nor share ideas.
The sad part is while this is going on our school system continues to decline and many of our children are unprepared for college or life after graduation from high school.

Another way to destroy middle class.

Did any of you ever consider the possibility that at these 33 schools, AT LEAST half the staff ought to be fired?

Bad teachers are the reason schools are bad. It's not the kids, people. Wake up.