More on the invasion of S. Williamsburg by Success Academy charter school 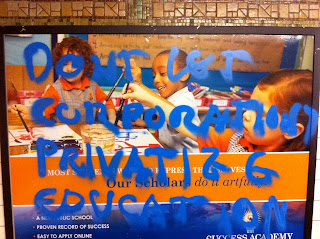 Check out the video below by Darren Marelli, along with Ellen McHugh's account of the hearings to co-locate yet another branch of Eva Moskowitz' charter chain in PS 50 in South Williamburg Brooklyn.

South Williamsburg is largely Latino, but Moskowitz has spent millions in advertising, recruiting and plastering the subways in the north section -- the gentrified part of district  -- with ads for her charter school, featuring mostly little white faces.  This, combined with the fact that her charter chain enrolls very few English Language Learners, and the community was never asked if they wanted her charter in their midst, has enraged many elected officials, activists, clergy and residents.

And we're back; another public school, another charter. This is getting monotonous, repetitive, scary, demeaning, pick a descriptor. There are co-location hearings such as this at least once a week in NYC and they run under the radar. Large scale newspapers never send reporters, small ethnic papers send young Jimmy Olsen type cub reporters, fresh from school and without knowledge.

We were in the well-lit auditorium of IS 50, in Los Sures, the beating heart of Williamsburgh. Nine people were on the dais: two from the local CEC District 14, two from the SLT, two from the CCSE, the principal from the high school, a representative from the DOE Division of Portfolio Planning and a representative of the SUNY Board of Trustees. There were a requisite number of assistants from the DOE sitting attentively in the front row. And next to them were two men with camera in hand, microphone extended, catching every word, filming every member of the panel on the stage or speaker in the well. Whispers in the audience let me know they were from Eva's Success Academy public relations shop.

The DOE rep began the meeting intoning the standard speech about the reasons we were here. None of us were surprised. We could read too. That's an issue with the DOE. Most of their employees think we (the public) only come with stupid. Not a brain among us.

He introduced the panel and began the public period of the meeting. While we were listening to him there was some action among the members of the panel. The principal of the high school heaved a sigh and whispered that she was glad she'd be out of the building in the fall.  The SUNY rep busily scribbled notes, rarely lifting his head and startled when asked a question.

Over fifty individuals had signed up to speak. Many of the speakers were long time residents of the area. They spoke English and Spanish to a sympathetic crowd. There were cheers. There were standing ovations. There are four elementary schools within walking distance of PS 50, but there was no high-performing junior high school. This plan would lead to further polarization in the community.
Progress Inc. produced 1,000 signatures protesting the charter school. Councilwoman Reyna received a standing ovation when she told the crowd that she would work to oppose the move. Congresswoman Nydia Velasquez sent a representative who promised that Congress would be looking at this co-location plan. A young man read a poem blasting the plan. Many asked hard questions: "What does it take?" What does it take for the DOE to hear us? What does it take for the DOE to hear the neighborhood and not Eva? Only one person favored the proposal for the charter school: one young, woman who was a resident of Williamsburg for about three years. It was heartbreaking.

Then a shiver of excitement went through the room. Occupy was outside. The people's mic made an appearance. In the back there was a bit of scuffle between two burly members of the security team the DOE folks travel with and some protestors. Quickly a huge banner on three poles was unfurled : "Success Academy = Vampires". The security people wanted the banner down. The poles were dangerous. To keep the peace, and keep the banner up, the poles were removed and some protesters held the banner.

What does it take? -- Ellen McHugh of Parent to Parent and the Citywide Council on Special Education

Because it's all complicated, politically and sociologically, I default to wondering why kids aren't taught to read in whatever scenario they find themselves.