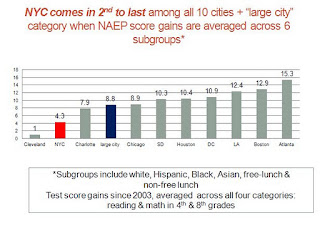 Class Size Matters has done a detailed analysis of the trend in student achievement in NYC since 2003, when Mayor Bloomberg's educational policies were first implemented, as measured by the NAEPs - the national assessment carried out every two years by the federal government in 4th and 8th grade English and math.
Despite the DOE's claims of great progress when the latest NAEP scores were released in December, our analysis shows that NYC came out next to last among the 10 large cities tested over this period, plus the large city category (all cities above 250,000 inhabitants) when the gains of our racial, ethnic and economic subgroups are averaged and compared to their peers elsewhere.  The only city to make less progress was Cleveland.
The gains in NYC have been particularly minimal among White, Hispanic, and non-free lunch students, all of whom dropped in their relative position compared to these same subgroups in other cities - falling especially sharply at the 8th grade level.  White students made the smallest gains compared to their peers in other cities in both 8th grade reading and math; Hispanics in 8th grade math.  In fact, Asians were the only NYC subgroup to increase their relative ranking at any level, compared to their peers in other cities. 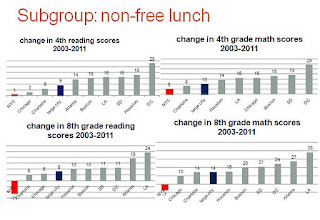 The performance of non-poor students has been particularly disastrous.  NYC is only city in which our non-poor students scored lower in 2011 than in 2003 in any category. The proficiency levels of NYC non-poor students also dropped sharply in both 8th grade reading and math.  (This is the one point extracted from our analysis in today's Daily News, though the article fails to attribute its source. The article also featured the DOE's claim to have improved results for non-poor students; though this group also made fewer gains than their peers in many other cities over this period.)
What else do our findings suggest? Clearly, mayoral control is no panacea, as the two cities that have made the least progress since 2003 on the NAEPs, NYC and Cleveland, both feature this governance system.  Moreover, the administration's free-market strategies of high-stakes accountability, school report cards, "fair student funding", principal empowerment, and the closing of more than one hundred schools & the opening of more than 400 new schools and charters, while allowing class sizes to increase, have not worked to increase student achievement compared to cities elsewhere.
Our power point, with lots of user-friendly graphs to illustrate our findings, is below; it is also posted on our website, if this version is too hard to see.  Our presentation also contains rebuttals of specific claims made by DOE about the city's NAEP results.  Please post your observations or questions in the comment section.  Thanks!

I am not surprised by these results. I have thought for a while that the push to improve education for poor kids has been done at the expense of middle class kids. Don't get me wrong, I think it's important to improve schools for all students but not on the backs of middle class kids. This year, for the first time ever, I decided to move my son to private school. Class size is the main factor for the move but I also find the curriculum ridiculous. Middle class kids (and I don't mean white kids, I mean middle class) need different supports than poor kids. For example, my son gets sent home with a reading log that we have to fill out each evening to document that he is reading for half an hour each evening. My kid reads for hours. It's completely unnecessary. What he hasn't done is read a book with the rest of his class and discussed it. Instead he reads on his own in class and uses post-its to highlight important information. These techniques are designed for kids who have trouble reading but have been exported wholesale to everyone. I could go on but the bottom line is the mayor should wake up. If the middle class realizes they don't have good schools to send their children to, all children will suffer.

I like it and hope that you continue posting.

Let me show other source that may be good for community.

I think that a great majority of American teachers predicted this when they got a look at No Child Left Behind. There is no doubt that American education needs help, but this is no way to do it. With all of the issues that confront American families and their children, to single out instruction as the focal point is idiocy. Thinking that a simple dose of Free Market ideas can overcome poverty, drugs, crime, television, video games and other pop culture influences is criminal in itself. Hopefully, America will soon come to its senses and realize that teaching is an art. It can't be plugged in and switched on. Teaching can be nurtured, supported and honored. Everything is not answered in Economics 101. Somethings are more complex.