Comments on the applications of Citizens of the World charters

2.       Evidence of possible corruption: Kristean Dragon was also, at least until recently, also the Executive Director of The Wonder of Reading, an organization which raises funds to equip Los Angeles public schools with libraries.  This organization still shares an address with the national network of Citizens of the World.  In 2011, the Los Angeles NBC affiliate ran an investigative series, alleging that the Wonder of Reading program raised funds to pay companies that engaged in kickbacks, leading to huge cost overruns.   Unfortunately, the website of Wonder of Reading appears to be defunct and seems to have lapsed sometime in 2010.

3.       Self-dealing and potential excessive compensation: Posted online on the Citizens of the World website is a service contract between the charter school and Wonders of Reading, for the latter organization to provide services to the charter school, extending into the 2014-2015 school year.  Even if never executed, this proposed contract is evidence of self-dealing and questionable ethics on the part of Ms. Dragon and the charter board that should disqualify her from running charter schools in our state or any other.  In addition, in 2010, Ms. Dragon, is listed as working full time for Wonder of Reading in its 990 IRS form, and receiving a salary of $197, 731 from the latter organization, plus $14,493 in benefits.  Because Citizens of the World has not submitted its IRS 2010-2011 form to Guidestar, it is impossible to see what salary, if any, she may have also been receiving from Citizens of the World.

4.   Fiscal instability: On March 23, 2012, Citizens of the World Hollywood, the single existing CWCS charter school, took out a $250,000 loan from the state of California. Their board minutes from February 16, 2012 point to the need for this loan to cover their cash flow problems and state that they are looking towards additional fundraising by parents to sustain themselves. In board minutes dated January 19, 2012, Samira Estilai from ExED, provider of business management services for the charter is quoted as follows:


”Additionally, she noted that with the deferrals and if the revolving loan doesn’t come through CWC would have a negative ending balance of approximately $15-20k. Strategies to address this include working to move up the schedule of donations from CWC Founder Mark Gordon to ensure a positive ending balance.”

This points to poor financial management of the organization; and the potential risk that NY state taxpayer funds may be used to cover the shortfall of the CMO’s operations in California.

5.      Confusing and ambiguous management structure:  The applications posted on the SUNY website for the two proposed Citizens of the World Schools list no name for the CMO, and instead says: “Not applicable”, even as this is clearly supposed to be part of a national chain of charters.  This is pointed out in the same minutes of their Hollywood charter school as cited above:


“Amy Held updated the board that CWC Schools is working throughout the country in similarly naturally diverse communities exploring the possibility of opening charters that share the same mission and model as CWCH. These include NY, Minnesota and the South.”

In the forms filled out by the proposed board of trustees of these NY schools, the same answer is given when the question is asked if the board member or his or her spouse know anyone connected to the CMO: “not applicable because the school does not contact [sic] with a management company or charter management organization.” And yet the application also says that these NYC charters “will be part of the national network of Citizens of the World Charter Schools.”  What will the legal and financial relationship between the charter schools in Southern California and those in New York City, if there is no CMO?  This is a troubling question.  The fact that the applications of both charter schools also appear to list identical proposed board members is yet another concern.

6.      Overwhelming community opposition: At District 14 hearings about this application, hundreds of local parents and community members spoke in opposition to the granting of this charter.  Not one member of the community stood up in support. Every elected official speaking on the record opposed the proposal, from the federal level (US Congresswoman Nydia Velazquez) to the state (Assemblyman Joe Lentol) to the borough president (Brooklyn Borough President Marty Markowitz) and City Council members (CM Diana Reyna and Stephen Levin).  The Community Education Council in D 14 also passed a resolution in opposition to these charters. The new charter law was written expressly so that authorizers would have to take community input into consideration when making a decision.  According to SUNY Charter Institute’s own RFP Guidance Handbook:

“SUNY’s proposal review process must generally ‘consider the demand for charter schools by the community,’ per Education Law § 2852(9-a)(b).”  And: “…applicants will also be required to show evidence of community interest in and support for the school.”

Approving this charter would appear to violate the intent of the law.

7.       Segregating effect: As pointed out by Brooke Parker on our NYC Parent blog,  Citizens of the World charters imply in their applications that they are seeking to be composed of students with a much different racial composition than most of the other public schools in the district, with a far greater number of white students and a smaller proportion of black and Hispanic students.   Nationally, charters have been shown to have a segregating effect, and these charters would interfere with the gradual integration of neighborhood schools that is occurring because of gentrification and as a result of federal magnet grants. In addition, the new charter law says that charter schools should show an intention to enroll and retain comparable numbers of high-needs students as the communities in which they are located.

8.       Likely impact on equity, class size and the city’s C4E commitments: The co-location of two more charter schools in D 14 would likely lead to more overcrowding and prevent the district’s schools from reducing class sizes to optimal levels and those set out in the city’s legally-mandated Contracts for Excellence plan.  The DOE’s utilization rates assumes class sizes of 28 in grades 4-8, rather than its C4E goal of 23 for these grades, in the plan that was adopted and approved by the state in 2007.

Already, average class sizes in the district have risen above the goals in the plan, and are likely to increase even higher if additional co-locations are approved in the district. See the charts below: 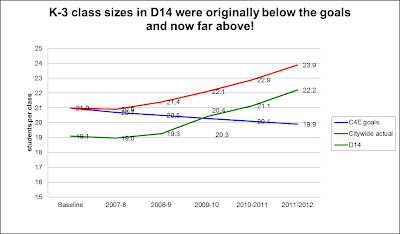 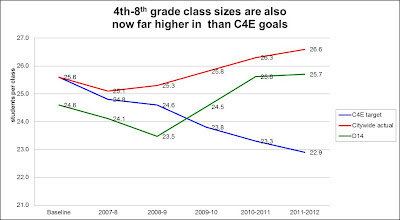 .
And yet class size reduction is one of very few reforms that have been shown to narrow the achievement gap, and one of only four cited by the Institute of Education Sciences that have been proven to work through rigorous evidence to improve learning for all students, no matter their background.
Conclusion: In the interests of good governance, fiscal prudence, racial integration, and educational equity, I urge you to reject the applications of Citizens of the World charter schools in D14.
Sincerely, Leonie Haimson, Executive Director, Class Size Matters
Posted by Leonie Haimson at 5/21/2012 06:27:00 PM

Don't be naive nycdoe uses 'corruption' as a means to an end. the state and feds cover for doe as too big to fail - it is through this means that things have gotten to where they are - how targeted schools and principals have been undermined in the past by the iscs - everyone gets theirs a little for you and a little for me- the state acts only when they will be held to account and and is just as pathological as the city. doe '''s problems are institutionalized going back to the board of ed - the power of the mayor has simply made it more difficult to do anything about those problems.

This post is well written but misguided. I agree that Charter schools can sometimes dilute the population of the public neighborhood schools, but Citizens of the World Charter is FAR different that it is being portrayed here. As a family that lives in both NY and LA, I can verify that CWC Hollywood is the MOST diverse school I've seen. They strive for at least 50% free and reduced lunch and the school is a rainbow ethnicity and background. The claim that "segregation" is an issue is so far from the truth! It's just the opposite. CWC Hollywood is a magnificent school and the new CWC Silverlake, which just started this year, is also fabulous. I hope, for the sake of students, this school does grow and expand because the model of peacemaking, educating the whole child, and honoring our diversity is of great value in our society. You guys would be lucky to get CWC in your district!

Looks like lots of parents in LA disagree with you, from Micheltorena to Braddock. They're fighting CWC too - and the data they've compiled show that CWC is re-segregating some terrific neighborhood schools in LA.

We want our kids in class together. That's public education.

We are also a family that lives in both Los Angeles and NYC and I agree with Anonymous... November 10, 2012 at 8:42 AM. The make up of CWC on all of its locations in LA is incredibly diverse. They actively want a diverse student population and do a great deal of outreach for free and reduced lunch eligible students and are welcoming of children with special needs. CWC Mar Vista is an excellent school.

It's really unfortunate a group of LAUSD teachers and parents feel so threatened. Help your schools instead of fighting charter schools - which are also public schools.