Pineapplegate continues, with 20 more errors, and finally an apologia from Pearson 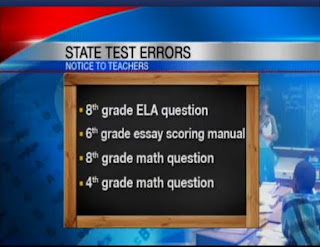 It has been nearly three weeks since I first blogged about the absurd Pineapple story on the NY State 8th grade exam, produced by Pearson.  Since then, even more errors have been found, and just yesterday twenty newly discovered mistakes in the  math exams in foreign languages were announced.  That brings this year's total to 30 errors in all,  including six Pineapple questions on the 8th grade ELA, a question on the fourth grade math test with two correct answers, errors on the 5th and 8th grade math exams, and an error in the scoring guide that forced the rescoring of the sixth grade ELA exam.

See this Daily News report and this account from NY1.  Regents head Merryl Tisch now says that these mistakes are "inexcusable", and that Pearson should try to win back public trust; but how?

So far, the testing company has gained little support even after a coordinated PR campaign, including the leaking of a  self-satisfied memo to Time magazine, claiming the Pineapple questions were all nationally field-tested, normed, and thus valid, accompanied by the lame defense of paid flack and Time columnist Andrew Rotherham.  On the same day, they put forward this yucky "Pearson" mom:

"First and foremost, I’m a mom....The assessment results help a busy parent understand what’s happening in the classroom because we can’t be there every day."

Yes, a busy parent now knows that their child's education is being undermined by unrelenting test prep and ridiculous, unreliable and pointless exams.

Obviously, this campaign didn't get them much traction, so today they leaked another memo to NY1, admitting that they had screwed up royally and that an internal investigation is underway: "Pearson agrees that we need to work diligently to improve."  Is this too little, too late?  As Lindsey Christ, NY1 reporter, rightly points out:


Chancellor Tisch said she will give the company one more year. However, some parents and teachers want the state to cancel the company's five-year, $32 million contract. They say students don't get a second chance with high stakes tests, so why should the test company.

Meanwhile,  teachers complain that with so many days spent testing and scoring the exams, little time is left for instruction or even meaningful assessments, and NYC parent Robert Kulesz, who opted his son out of testing, writes in Schoolbook:


But it’s no wonder our kids are getting lost: our politicians starve our schools of desperately needed resources (while the Pearson corporation vacuums up $32 million in taxpayer money), ignore the voices of parents, students and concerned administrators (see the New York State Principals’ Letter), and then have the gall to blame the teachers.

Mr. Bloomberg may be a wonderful businessman, but he’s no educator. The arrogance of a powerful few in the Education Department when it comes to addressing parental concerns is insulting and condescending.

I have heard Meryl Tisch of the Board of Regents speak of the “scientific” validity of such value-added, high-stakes testing, but this is provably wrong. Her “science” as practiced on our children will one day be revealed for what it is: statistical phrenology, all in the service of a buck.

Below is a TV report from Channel 9 news in Central NY about how Pearson's errors have caused many cash-strapped districts to have to spend additional funds on overtime paid to teachers who are rescoring the exams for a second time. As far as I know, NYC is the only district where the cost of scoring is pushed onto schools.

The real problem is the emphasis put on these tests and the amount of time spent preparing our students for them. Thus each question becomes essential and the ridiculous scoring system can determine our children and their teacher's future.

You know, Pearson outsources much of its editing to the Philippines.

On a similar theme, who creates the Regents World History & Geography exams? Since Tisch went on WNYC and said they were thinking of doing away with it, I thought I'd have a look. Many of the multiple choice questions are poor or ambiguous.

eg. solipsism: "Which nation lost the most territory as a result of WWI"...choices, along with Germany include Austria-Hungary, not a nation, and non-existent after the peace treaties!

eg. Historian's primary source has choice of textbook, encyclopedia, almanac, and autobiography... actually all can be correct (history of ideas, in history of schooling...etc)