Tory Frye on why parents are so angry about testing & how we can fight back!

The following is by Tory Frye, a NYC public school parent and a member of the Community Education Council in District 6.  She explains why  parents are so angry about the systematic erosion of learning conditions at their children’s schools in recent years and what we can do about it: 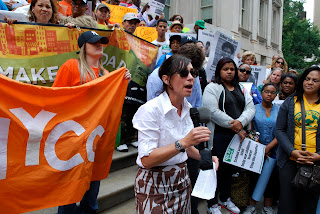 tsting is frequently about understanding the technique of test taking - and in the instance of NYCDOE and the state and feds it is actually meant to restrict what is being taught since the objective is to deconstruct publuc school education and what is perceived by some as its liberakl bias - the objective is clearly despite any protests to the contrary to technicalize and at the saME TIME CONSTRAIN WHAT IS TAUGHT.

Everyone must stop taking the tests. Their only purpose is to justify the privatization of education, the destruction of the unions, and the channeling or resources away from teachers and to consultants and testing companies.

Bravo. Your article is clear and concise and lays out the very dire problem in our public schools. You have one fact wrong, and that is the assumption that the children in the suburbs are not subjected to the same drain on resources and time. I am an organizer in the "suburbs" and my child has been subjected to the same test prep schedule, the same loss of teacher hours due to marking, the same mind numbing hours of doing nothing while waiting for the testing time to end. Our schools have been eroded by this meaningless practice. Assessment is good, evaluations are good. But these tests are not accurate and are not evaluating the very things they claim to. Here, in the suburbs, we have less choices of public school enrichment and at the same time, our core curriculum has been completely eroded, so our children are sitting and waiting to learn. Make no mistake, we are all in this mess together. It's time for us to join forces and make our voices so loud that Albany will have to listen and enact change.

For more information about the boycott of the June field tests in NYC, check out Time Out from Testing's website, http://timeoutfromtesting.org/index.php, as well as the two mentioned above (Change the Stakes and PVNY).