Comments on the applications of two more Success Charter schools

Dear SUNY board and SUNY Charter Institute:
I urge you to reject the application of Success Academy to open two charter schools in District 2 on the following grounds:
1.    Attrition and push-out rates: This charter chain has a very high student and teacher attrition rate, as referenced in news articles  and its NYS report cards [annual teacher attrition rates of 38%, 56%, 19%, 50% and 26%.]  It also has a documented history of pushing out high-needs students.   And yet the new charter law explicitly says that charter schools should demonstrate an effort to recruit and retain at –risk children.  This is not a model which deserves replication elsewhere in the city.
2.  Evidence of excessive compensation and proposed charter management fees: Ms. Moskowitz receives an annual salary in excess of $379,478, in addition to benefits worth more than $24,000, amounting to a total compensation package of $403,660, according to the latest available (2009) submission to the IRS by the Success Charter Network.
Governor Cuomo has inveighed against excessive salaries for district superintendents who receive far lower salaries, and has proposed capping superintendents’ salaries at $175,000 a year in districts with fewer than 10,000 students. According to the SUNY charter website, the Success chain of charters has fewer than 3,000 students.
The Governor has also created a task force to investigate excessive compensation levels at not-for-profits that receive taxpayer support from the state, and in January, signed an executive order to limit spending for executive pay at state-funded service providers, including a $199,000 salary cap.
In addition, Ms. Moskowitz has applied for an increase in her management fees to 15%. These fees are twice the average for a NYC CMO (7%) and close to the average of for-profit NYC EMOs (17%). New charters run by EMOS are now banned by law, as I’m sure you are aware. Her excessive compensation and proposed hike in fees reveals a lack of fiscal prudence with taxpayer funds, and she should not be rewarded with permission to expand her network until these other matters are fully resolved.
3. Overwhelming parent and community opposition: At District 2 hearings about this application, scores of local parents and community members spoke out and have signed petitions opposing these applications.  To my knowledge, not a single elected official representing the district supports these proposals and many have submitted comments against them.  The Community Education Council in District 2 passed a resolution in opposition to these applications, as well as Manhattan Community Boards 5,6, and 8.
The new charter law was written expressly so that authorizers would have to take community input into consideration when making a decision.  According to SUNY Charter Institute’s own RFP Guidance Handbook:


“SUNY’s proposal review process must generally ‘consider the demand for charter schools by the community,’ per Education Law § 2852(9-a)(b)…applicants will also be required to show evidence of community interest in and support for the school.”

Approving this charter would appear to violate the intent of the law.
4.Likely impact on overcrowding, class size and the city’s C4E commitments: The co-location of two more charter schools in D 2 would likely lead to more overcrowding in a district that is already extremely overcrowded, and would prevent the district’s schools from reducing class sizes to optimal levels as set out in the city’s legally-mandated Contracts for Excellence plan.  The DOE’s utilization rates assumes class sizes of 28 in grades 4-8, rather than its C4E goal of 23 students per class in these grades, in the plan that was submitted by the city and approved by the State Education Department in 2007.
Already, average class sizes in the district have risen above the goals in the plan, and are likely to increase even more if additional co-locations are approved in the district. See the charts below: 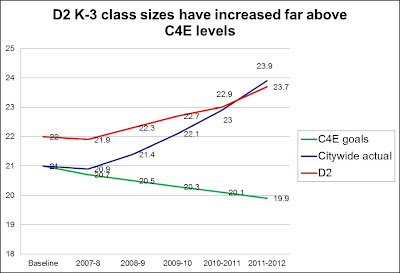 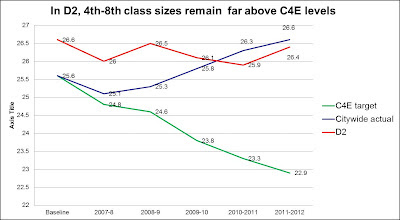 And yet class size reduction is one of very few reforms that have been shown to narrow the achievement gap, and one of only four cited by the Institute ofEducation Sciences that have been proven to work through rigorous evidence to improve learning for all students, no matter their background.
4.       Potential impact on disabled students: As NY State Senator Liz Krueger points out, two of the schools that are officially “underutilized” on the DOE’s list of possible co-locations for Success Academy house disabled students:   the School for the Deaf on E. 23 St, and the middle school for students with autism wthin the Julia Richman complex.  And yet the DOE’s utilization formula does not take into account the special needs of this populations, widely recognized by  state and city regulations and guidelines pertaining to space.
5.       Safety :  I also want to echo the concerns of Sen. Krueger about the inability of SUNY to ensure proper safety without knowing in advance where this school will likely be sited.  As she writes:

New York State Education Law Section 2853(3) states that in New York City "all charters authorized...shall be obliged to comply with the department's health, safety and sanitary requirements applicable to facilities to the same extent as non-charter public schools in each such city school district."  It is simply impossible to ensure that these requirements are met if siting information is not included in the charter application for authorization.  Moreover, since there is no mechanism at the state level to address any negative impacts on children's safety, sanitation, or health after a charter has been approved, it is absolutely imperative that these issues be thoroughly examined and addressed during the authorization process.

Conclusion:  In the interests of good governance, fiscal prudence, educational equity, and safety, I urge you to reject the applications of to establish two new Success Academy charter schools in District 2.

Thank you for your analysis, Leonie!

CM Mendez, AM Glick, Sen Duane and Kruger submitted a letter urging the state not to approve the application. CECD2 also has resolutions against it.

You are 100% correct. The real sad part is nobody really cares and I am afraid the application will be accepted and once again the children,educators and parents of our city will be ignored and their education hampered.The Unfortunate part is the politicians who know nothing about education are allowed to make this decision.

I felt sick to my stomach when it was revealed that no one from the SUNY charter board attended the public hearing on May 1st nor would they be reading the testimony of the parents that spoke against the Success Academy application. The only ones who spoke in favor of the application were Success Academy employees and residents of OTHER districts.