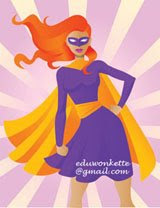 Check out this terrific Eduwonkette posting -- in which she points out that despite Joel Klein's continual attempts to portray his policies as equitable, are quite the opposite.

This has become most obvious in his ham-handed attack on the whole notion of providing more funding through the Contract for Excellence for NYC's low-performing schools.

I would add another point -- that the Chancellor, who talks endlessly about the need to address the achievement gap, refuses to implement one of the very few reforms which have been shown to narrow this disparity -- reducing class size.
Posted by Leonie Haimson at 6/02/2008 10:02:00 PM

I couldn't find a way to contact you so I apologize for putting this here...

Thanks for your help!
Philip