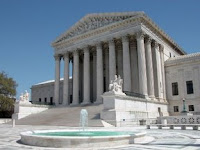 June 12, 2008 (GBN News): Attorneys for the hundreds of NY City teachers being held in Reassignment Centers known as “rubber rooms” say that, due to yesterday’s US Supreme Court ruling, those teachers may be able to challenge their detentions in court. In a 5-4 decision, the Court ruled that the rights of hundreds of terrorism suspects being held indefinitely and without charges at Guantanamo Bay Naval Base have been violated.

Like those detainees, many of the rubber room teachers are also being held without being informed of the charges against them, and some have been waiting longer than many Gitmo detainees for their hearings. Their attorneys are prepared to argue that if the Supreme Court decision applies to foreign terrorism suspects, it should certainly apply to NY City teachers.

While President Bush is said to have reluctantly agreed to comply with the ruling, Mayor Bloomberg may have other ideas. “It was the State Legislature that gave me total control of the schools,” the Mayor told GBN News. “Mayoral control means Mayoral control, thank you very much, whatever the Supreme Court says.” Mr. Bloomberg went on to say, “We view these teachers as ‘enemy combatants’, and our children deserve better than to have them undermine our school reforms.”

Despite the Mayor’s comments, teachers languishing in rubber rooms throughout the city may well be encouraged by a statement from the majority ruling, written by Justice Anthony Kennedy. “The laws and Constitution, “ he wrote, “are designed to survive, and remain in force, in extraordinary times.” As one attorney said to GBN News, “Maybe the laws will even survive a Mayor and Chancellor who have been determined from day one to flaunt them.”
Posted by Gary Babad at 6/12/2008 08:39:00 PM