The mystery continues: who is funding the Klein/Sharpton operation? 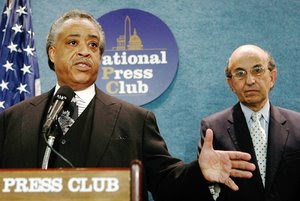 See the latest email from David Cantor below – DOE’s press secretary-- on the fact that the new Klein/Sharpton operation is being funded "anonymously" -- though apparently not by Bloomberg himself. In our earlier posting, we reported his assertion that the Gates/Broad foundations were not implicated either.

One would think that given the kind of public campaign that these men say they are embarking upon, including staging "events at both political conventions” and attempting to influence the position of the next President, they should be obligated to reveal their source of financing.

David also questions my description of the DOE press office as large and well-funded.

Here is an excel file from last October with the names, salaries and positions of thirteen people employed in the DOE Communications office, as well as many additional PR staffers, including seven in the “Strategic Response Unit”, those tasked with responding to outraged emails from parents, whose canned non-responses usually result in outraging them even more.

According to those in the know, the DOE press office is at least four times the size of any previous administration and much larger than the press operation of any other city agency. It is more than twice as big as the PR department of the US Department of Education.

Not that its members don't earn their salaries, working overtime to cover the blunders and misstatements of their superiors.

Speaking of which, the file also contains the salaries of the top administrators at Tweed as of September 2007 – with Jim Liebman, former law professor, tied for third at $196,575.00. Liebman was appointed as head of the so-called Accountability office, despite the fact that he had no experience in the fields of public education or testing and proceeded to prove this.

See this newsclip from Channel 2 back in December; with Klein trying to justify the fact that 18 officials at were paid more than $190,000 a year, saying that they could earn three times their salaries in the private sector. I responded that if so, they should go back there, because they had abundantly proven that they don't know anything about public education.

As to the ongoing mystery about who is funding the Klein/Sharpton operation, I followed up by asking David who is paying his salary when he acts as the chief spokesperson for this effort. Is he getting paid extra by this "anonymous" donor -- or are his additional duties being covered by his regular salary, i.e. through taxpayer money? In the midst of budget cuts to schools, one would think this was rather hard to justify.

Secondly, is he thinking of writing an expose a la Scott McLellan about his adventures in the land of Tweed when Klein's term in office is over? I myself would pay a pretty penny for such a book, and I bet others would as well.

I was forced to turn down David’s offer to come to to fix his copying machine; as I don't have any particular expertise in that area (not that ever stopped the Chancellor in his hiring decisions.)

Perhaps by cutting down on the high salaries of some of ’s top educrats -- or eliminating one or two positions in the burgeoning Accountability office, they might be able to afford to pay a repairman. Or they could save on Liebman’s salary, as he is supposed to return to his professorship at in July.

As soon as I receive a response from David, I will let you know.

From: [mailto:cantorrac@gmail.com]
Sent: Friday, June 13, 2008 11:20 PM
To: Leonie Haimson
Subject: Re: question for David Cantor: who is funding this project?

Leonie: The project is being funded anonymously. No public money will be spent. The mayor is not funding the project.

Re comments on your blog: If Class Size Matters ever wants to hold a press conference in , the National Press Club room we used (Zenger Room) is available for $500. Also, I invite you to come over to the press office when next you're at and check out our "huge" communications "juggernaut" at work. I think you'll be surprised. If you're any good at fixing a copy machine we may put you to work.

The entire school system is now being operated as a public relations operation.