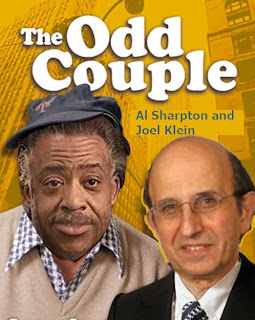 Lots of publicity for the Klein/Sharpton alliance, inaugurated at the National Press Club yesterday, where no doubt they faced a less skeptical press corps than they would have in NYC -- though the Washington Post pointed out that “It was the kind of odd coupling that seemed more like the premise for a reality show than a news conference on education policy.”

As predicted, this "new" coalition will focus on charter schools, union-busting and teacher scapegoating – with not a single word about the need for any of the reforms that have actually been proven to work to narrow the achievement gap -- like class size reduction.

This strategic alliance, or "beautiful friendship" as Klein likes to put it, appears to be based upon the ideological biases of its funders -- the Gates and Broad foundations.

Accordingly, at the news conference, their statements were full of ignorant and self-serving nonsense:

NY Sun: “Mr. Klein said the achievement gap had "barely narrowed" in the more than five decades since the Supreme Court ordered the desegregation of the schools in the landmark 1954 decision, Brown v. Board of Education.”

This is right-wing tripe that has been repeatedly disproved. The achievement gap, though still significant, substantially narrowed in the 1970’s and 1980’s. (See the analysis in this classic work, for example.)

Who is he kidding? While he has been missing in action on these issues, the NAACP and other mainstream civil rights organizations have led the charge on educational equity – including, most recently, helping sponsor the Florida constitutional amendment requiring smaller classes in all grades.

Baltimore Sun: “They [Klein and Sharpton] support … more accountability for everyone, including central office staff.”

Sure. Tell me a single educrat at who has been held accountable for their multiple fiascos, from the bus route disaster last year, to this year’s mix-ups with admissions to G and T programs, preK and middle schools. Not to mention the serial blunders of the Accountability office, from the ridiculous school grading system to failure of ARIS, the $80 Million plus super-computer system.

Meanwhile, according to the Daily News, “The entire English staff at closing was handed walking papers this week, a move that would leave no licensed English teachers for next year's students, the Daily News has learned.”

Talk about educational equity! I guess those kids don’t need English teachers – another backwards version of equity, no doubt, in the .

An article in the News reports on the continuing harassment of Sikh students, which unfortunately omits the fact that the DOE has refused to comply with a law passed by the City Council four years ago, requiring the reporting and disciplining of anti-bias crimes in schools.

Also see the article in the News about , Queens CEC member, who filed a complaint against the attempt by DOE to eliminate all authority of parents on School Leadership Teams to develop school budgets and Comprehensive Education Plans. See our blog in early January about this outrageous and illegal move by Klein et.al., just after the complaint was originally filed.

Meanwhile, this new coalition blathers on about the need for “increased parental involvement.”

As Sharpton said at the news conference, “Who is standing up for the children?"

I can understand the frustration, but besides the ranting and raving do you have a suggestion on how to close the achievement gap?