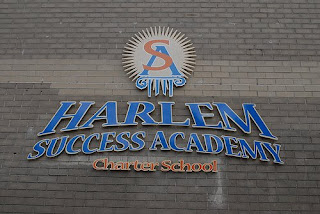 It's just so ugly that hearings and meetings taking up issues of school governance law are being swamped by troops turned out by Bloomberg/Klein. People can't even attend the Assembly hearings because of these crowds of "supporters". At the last Assembly hearing I kept asking these elderly Harlem women holding signs about extending mayoral control who they were representing and they told me they weren't allowed to say. I asked them why they believed in mayoral control and they said they didn't know. They were being field marshalled by white women who I was finally informed by one of the Harlem women were charter school advocates. I expect it was the same political theater in district 3 -- drown out the democracy with tightly controlled and uninformed "rent-a-crowds".

It would be useful to know and publicize where the funding came from for the busses which brought outside demonstrators to the event.

What is especially sad about this Mayor, and his "control" is that he has no plan to improve a "failing" school. If he had a plan, that is a failure because schools continue to fail. The only plan seems to be to close public schools and open charters, which aren't public in the traditional sense. This is not fair, equitable or effective governance of a school system.

Mayoral control was supposed to provide one person who could be held accountable for the success of the schools and the school system. This mayor has not been successful in a great many ways, but there seems to be no way to hold him accountable. The time has come to demand his accountability.

I was at the meeting. I find it a bit odd that PS 241 parents think the school is great when it is not doing very well, at least in terms of test scores. I would not send my child there. But replacing it with a charter school that will exclude the worst students is a bitter pill for the community. Even if the worst students are bussed to better schools and their scores/learning improve, it is shocking that the DOE is not even going to try to provide a good zoned school. A charter school can be great but only for the kids who get in. What about everybody else?

This post is almost a year old, but I had to comment. PS 241 was never a failing school. It was a struggling school, that continues to struggle for the resources it needs and for real support from the DOE with its above average number of high needs students(English language learners, special education students, foster care students, temporary housing students, free lunch students, students with active ACS cases). Even with the DOE sabotaging PS 241 last year and this year too, the school was one of the city's top 10 MOST IMPROVED schools in May of 2009 and they received an A grade on its annual review! The DOE doesn't give a damn about PS 241 or any other Harlem School. even with the test score gains and the A grade the DOE denied PS 241 a pre-kindergarten that they recieved 20 applications for. All the DOE is interested in is replacing public schools and dictating to parents what their choices are. Democracy is dying and the DOE's Klein and Bloomberg are leading the charge