Shame on You, Mr. Murdoch!! 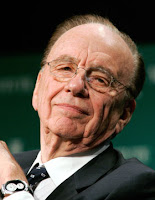 Today, the New York Post elected to top that disgrace, hands down, by printing the following editorial cartoon by Sean Delonas.

The cartoon draws from the recent police shooting in Stamford, Connecticut of Travis, an out-of-control chimpanzee, with the two befuddled (and apparently Conservative Republican) cops lamenting that the country will have to find someone else to write the next economic stimulus bill now that the monkey is dead. The overtones are appalling, not just racist in the most disgusting and retrograde of ways but also not-so-subtly promoting violence directed at America’s first black President. This from an editorial board that routinely and slavishly supports its corporate soulmate, Mayor Bloomberg, particularly when it comes to the Mayor’s dictatorial control over the City’s public schools.

This cartoon, sad as it is, needs to be subject matter in every NYC high school history and government classroom when school resumes next Monday. Anyone who believes that racism, whether personal or institutional, is no longer tolerated, or is something whose vestiges remain only in the Deep South, needs only look at this pathetic attempt at political “humor” to disabuse themselves of this notion. Our children in the city’s public schools need to see that it’s still right here in their back yard, in one of their local daily (I shudder to dignify Murdoch's fish wrap with the word) newspapers.

An apology will not be enough. Nothing less than two firings will do - one for Mr. Delonas, the other for the editor who let this go to print. Boycott, anyone?

The Post issued an apology this evening for Wednesday's "dead chimpanzee" editorial cartoon. The apology, to be printed in tomorrow's edition, reads in part as follows:

It [the cartoon] was meant to mock an ineptly written federal stimulus bill. Period. But it has been taken as something else - as a depiction of President Obama, as a thinly veiled expression of racism. This most certainly was not its intent; to those who were offended by the image, we apologize.

However, there are some in the media and in public life who have had differences with The Post in the past - and they see the incident as an opportunity for payback. To them, no apology is due. Sometimes a cartoon is just a cartoon - even as the opportunists seek to make it something else.

This statement makes Alex Rodriguez's recent steroid non-confessional look like the hair-tearing, breast-beating, crying jag mother of all apologies. Sorry, Col [Editor Col Allen]. Sorry, Rup [Rupert Murdoch]. Not nearly good enough. If it weren't for the truth-telling likes of Al Sharpton and Keith Olberman, you would never even have gone this far.
Posted by Steve Koss at 2/18/2009 12:50:00 PM

The Post is delivered to some high schools. Not For Sale copies are delivered. The DOE should suspend the delivery to schools at once.

Hello?! I'm guessing in all your ranting you neglected to watch the news the day before when that freaking "intelligent and able to drive and do other human-like things" chimpanzee was shot by the police for attacking that woman? It's been on the news every day all day since it happened. That's what the cartoon was lampooning, not Obama. The idea was that the bill was written by the chimp - the one that ate that woman's face - that was supposedly so smart. Geez are you people so stupid and bent on trying to find negativity in the world that you jump on everything and try to call everything racism, or anti-school, or anti-parents, etc. This site is what is the real tragedy. After following it ever so often throughout the year, I think you guys would have us return our schools to the oh-so-great 70's. You seem to be anti teacher, anti administration, anti data driven instruction, anti progress, and just about any other anti I can think of when it comes to trying to improve our schools. I see why none of you have gone and gotten your teaching degrees to try to help our kids - all you want to do is gripe.

The Post has not said what they intended the cartoon to represent although they have apologized for it. You have a point of view and others have a different one.

As for being "anti-everything", that's hardly a fair criticism. As parents we have a vested interest in creating a better environment for learning in the schools. There is not a single perspective here. Many parents feel it is important to provide smaller class sizes and a decreased emphasis on high stakes testing. SLTs should have their lawful role in school governance. CDECs should be consulted in school closing and siting decisions. This is an affirmative agenda.

If you feel all decisions should be made by the mayor and chancellor in a vacuum and without checks and balances, then there are many other places you can get your news. Try the bloated DOE press office, Learn NY or the Fund for Public Schools. But you should know that most New Yorkers do not approve of the mayor's management of the schools, so we are hardly alone in taking the positions we do.

I agree with Patrick, we're all entitled to our opinions...

In my opinion, the subject cartoon was a blatantly racist attempt to smear President Barack Obama and the stimulus bill...

I also believe that the only way to let the NY Post and it's owner Rupert Murdoch know how we feel is for all New Yorkers to stop buying the newspaper...

Furthermore, principals should refuse delivery of the paper to their schools...

Let the NY Post delivery trucks go back to their printing plants with their complete loads still intact...

Hit the NY Post where it hurts most, in their pocketbook...

Remarkable how the first people to accuse others with different views of being "anti-" are invariably so "anti-" themselves.

Regarding the Post editorial cartoon, only an ignorant fool would fail to see precisely what that cartoon said. If "someone else" was now going to have to write the next stimulus bill, who was the "someone" who wrote the first one? Otherwise, there was simply no connection between Travis (yes, I do watch the news, and even read it!) and the stimulus bill.

As for being anti-school, I'd describe myself as pro-student and pro-education, which is far more than I can say for those running our city public schools now for their own political benefit. Oh, and by the way, I do have a teaching degree (in addition to an MBA) and I did teach (math) in a NYC public high school. I believe I do know something about education, and what's going on under Joel Klein is NOT education. It's narrow, and narrow-minded, rote learning for the sake of test preparation. Kaplan writ large.

Remarkable also how those of us who care and express our objections do so under our names, while those who scream about our being "anti-" hide behind "Anonymous."

Im sure that was a pretty low blow, but a funny one nonetheless. Easy on the gears there.