Growing the bureaucracy: but guess which office at Tweed has actually shrunk? 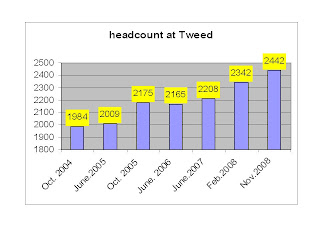 The Daily News carried an article this morning, showing that despite the budget cuts, and the increasing class sizes in our schools, and the fact that there is supposed to be a “hiring freeze” at Central, Tweed continues to hire more educrats – with nearly a hundred new ones since last February: Bureaucrats and class sizes are up sharply

Here is where you can see the headcount as of November 2008 (the latest available data)-with Central at 2422 full time employees; as of February 2008, there were only 2342. In October 2004, the earliest data I could find, there were only 1984 – which means the bureaucracy has increased by 22% since then.

In October 2004, the Department of Assessment and Accountability had 19 employees. As of Nov. 2008, this number has grown to 89 – an increase of 421%. Enough to create more useless and misleading test score data.

The Chancellor’s office had seven positions, while now he has16 underlings, a growth of 129%. Enough to help him run around the country and brag about his non-achievements here in NYC.

Office of School Enrollment Planning and Operations (OSEPO) had 19 employees, and now has 35 – an increase of 84% --enough to screw up preK admissions royally!

The Office of Public Affairs had 13 employees as of 2004; now Communications, Communications, Media Relations & Community Affairs is up to 23 – an increase of 77% -- enough to spread disinformation far and wide.

But not all offices of have grown.

For example, the Office of the Deputy Chancellor for Teaching & Learning had 133 positions in October 2004. Now it is down pitifully to 23 – a reduction of 83%. This is symbolic of the actual interest in teaching and learning at DOE.

The teaching staff has also shrunk since last year. According to a DOE spokesperson, there are “440 fewer teachers working directly with students than … the year before.”

Thanks to you and the News for covering this. Bloomberg's Chancellor is doing SOMETHING, it just has nothing to do with improving our schools.