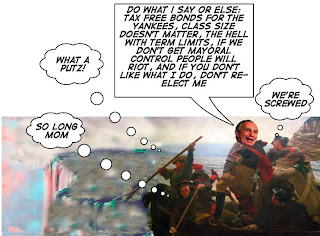 In December 12, 1776, with the new nation on the brink of defeat, the 2nd Continental Congress granted George Washington “full power to order and direct all things relative to the department, and the operation of the war.”
On June 14, 2002, with the New York City Public Schools foundering, the Governor signed legislation granting Mayor Bloomberg the right to appoint a majority of the Board of Education, with power of removal. The Chancellor was designated Board Chair as well as the superintendent and chief executive officer, to “serve at the pleasure of and be employed by the Mayor of the City of New York.”
How Washington and Bloomberg used their broad powers is a study in contrasting leadership styles.
In his Pulitzer Prize-winning history, “Washington’s Crossing,” David Hackett Fischer describes how General of the Continental Army George Washington “found a way to combine energy and decision with the principles of a republican polity” by working closely with congressional officials and other civilian authorities.
In a contrary manner, Mayor Bloomberg now argues that the schools are exempt from the structures of local government and that he may act unilaterally, outside city purchasing, audit, and legislative mandates.
In their use of data, supposedly a signal accomplishment of the Mayor’s, the two men also differ. Rather than monopolizing data collection and dissemination, Washington encouraged “a free and open system of information gathering, engaged the efforts of many people, produced multiple sources, and got better results than closed systems.”
But these differences in acceptance of democratic principles are not merely structural or operational. They go to the character of the two gentlemen. As described by Fischer, Washington functioned “more as a leader than a commander; always listening, inspiring, guiding; rarely demanding, commanding, coercing.”
In two pivotal decisions, Washington demonstrated this trait of collaborative leadership, a characteristic the Mayor would do well to emulate. After the First Battle of Trenton, back on the Pennsylvania side of the Delaware, with the British on the opposite shore still poised to take Philadelphia to end the War, Fischer writes that, “as at every difficult moment, Washington decided to convene a council of war.”
Rather than rendering a unilateral command decision, Washington led the council in an open discussion in which the General took pains to hide his own opinions, letting the purposely pluralistic membership freely argue their various proposals. “It was his way of encouraging open discussion and constructive debate,” Fischer concludes.
After deciding again to attack and successfully fending off the British and Hessians in the Second Battle of Trenton, Washington faced another critical decision: whether to withdraw or continue to engage the enemy, led by General Cornwallis. Fischer compares the councils formed by each:
“Cornwallis imposed his plan from the top down, against the judgment of able inferiors...Washington in his council of war welcomed the judgments of others and presided over an open process of discovery and decision that yielded yet another opportunity.”
Suppressing the desire to re-engage, the collective decision was made to withdraw the exhausted army from the Trenton battlefield, resulting in later victory at the Battle of Princeton. The rest, as they say, is history.
Leadership in the 21st century may have different demands than in 18th, but it is hard to believe that Bloomberg’s challenges are any more daunting than Washington’s quest for national survival. Yet even in the urgency of war and knowing the high stakes of broken confidences, Washington pursued a politics of openness and consensus.
I don’t know what debates may take place within the Mayor’s and Chancellor’s inner circle but as a long-time member and former President of a citywide parent organization created by the Chancellor ostensibly for the purpose of advising him, I know that we are not consulted and that our proffers of help are routinely rejected. The Mayor’s top-down approach is also well known, even to the point that his appointees to the city school board are removed if they oppose him and forbidden to speak publicly about their work.
As the Mayor contemplates his third term and educational legacy, perhaps it is time to learn the lessons of our greatest leader. Be open. Listen. Reject coercion. Pay attention to democratic principles, guide, and inspire.
---David C. Bloomfield is Professor of Educational Leadership at Brooklyn College and the author of American Public Education Law (Peter Lang, 2007)
Let us also remember: Washington famously refused to run for a third term, even though he was encouraged to do so, believing "that no president should serve more than two terms lest he be looked upon as a king." In contrast, Bloomberg showed no such reluctance -- collaborating with the Council to revoke term limits unilaterally, even though NYers had voted twice against this.
Posted by Leonie Haimson at 2/15/2009 06:19:00 PM