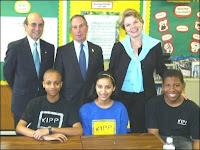 February 27, 2009 (GBN News): According to sources close to Mayor Michael Bloomberg, his recent purchase and renovation of property adjacent to his East Side townhouse is not merely intended to increase his living space. The Mayor will instead use the extra space to house a charter school right in his own home.

The Mayor is reportedly hedging his bets due to his concern over the fate of Mayoral control of the school system. Legislative hearings have not been going well for Mr. Bloomberg, and he could lose at least some measure of the total control that he has been exercising over the public schools for the past seven years.

Mr. Bloomberg has bristled over the prospect of ceding some of his authority to stakeholders like parents and their elected representatives, who he feels are “annoying”. He is said to feel that it is preferable to have total control over one school than to have to share control over the entire system.

However, GBN News has also learned that the Mayor does not plan to stop at just the one charter school. Once the school gets large enough, the Mayor plans to break it up into an increasing number of small charter schools, all housed under his own roof. Moreover, the Mayor is said to be negotiating with Education Secretary Arne Duncan to direct billions in Federal stimulus money to his charter schools, so that Mr. Bloomberg does not have to tap into his own dwindling billions.

J. Fredrick Runson, chair of the political science department at Manhattan University and an expert on education politics, says he is not surprised at the Mayor’s plans. “He hates giving up control and he’s really competitive,” Dr. Runford said. “He may be trying to create his own charter school empire here, and if it gets big enough - with the billions in stimulus money he can buy up all the adjacent property from river to river if need be - he may just be able to put the public schools out of business. At the very least, he certainly won’t stop until he has more charter schools than Eva Moskowitz.”
Posted by Gary Babad at 2/27/2009 01:50:00 PM

thank you Gary; this was one of your best. You make my day each time you blog.

The sad thing is the absurdity in Gary's piece could actually become reality (or rather, if it became reality I would not be surprised). Only a person who has intimate knowledge and deep understanding of the ills of this administration can come up with a piece like this! Thank you for a great laugh to start the day!!

In Part II of this reality series,Klein closes all true public schools in the neighborhood and sends those children to other districts because of the Mayor's Charter Home School Project!