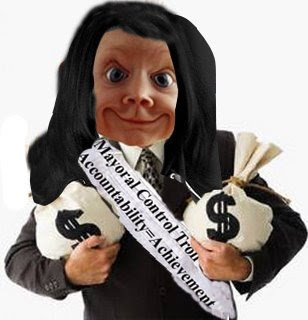 Remember when there was an anonymous person who left pro-mayoral control comments on our blog, and other blogs, without identifying himself? And we accurately guessed he was probably from , a lobbying organization set up by Bloomberg to retain Mayoral control? His identity was subsequently confirmed by his own confession, as well as an article in Gotham Schools, which outed him as Brian Keeler, a consultant for .

Well, there’s a new Mayoral control troll in town named “Abby,” who on March 24 wrote on the WNYC blog:

When the Mayor and the government were not involved in our education system, NYC schools failed our students. To ensure education is a top priority, we must continue to make our leaders responsible for its success. People who believe the Mayor has too much control, are not considering the growing number of schools and students who succeeding.

On the same day, "Abby" left her comments on Gotham Schools– saying that the Mayor has allowed one hundred charter schools to open, and if only we maintained Mayoral control, “NYC will eventually reach a point where all students are receiving a quality education” (presumably through the further multiplication of charter schools).

And then on March 26, she was at it again on Gotham Schools, saying that it's “time to put petty bickering and politics aside and make students and education the focus” by continuing Mayoral control. (No matter that the Mayor and Klein are the ones who engage in non-stop political spin, and spend precious taxpayer money to try to keep their chokehold on our schools.)

I was feeling a little suspicious of this Abby, even though she identified herself as a “citizen” and didn’t link to any organizational website. Paid representatives of and the Mayor tend to produce obviously canned talking points rather than arguments that engage realistically with the matter at hand. Their comments lack substance and conviction, and read like something written for the back of a cereal box.

Sure enough, a few days ago, someone from Learn NY named Abby Sugrue sent around an email to parents, including several on our NYC education news list serv who had never signed up with the organization, bragging that in a recent article about the Assembly hearings on school governance, “The New York Times called our supporters and coalition a "heavy weight parent group"!

Clearly, if Mayoral control trolls are trolling for emails among our subscribers, a known hotbed of parent activists, acutely aware of the damaging effects of mayoral autocracy on our schools, they must getting desperate.

Leonie, please investigate a program that the DOE is using in the high schools. It is the PLATO program. It is an on line program that is supervised by employees at the schools. Counselors and teachers outside of their license oversee the students and up to (2) credits can be granted for this highly suspect program which is another example of credit recovery. The UFT, and the newspapers have been informed of this program but so far not a word has been heard.