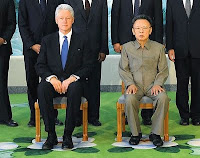 August 7, 2009 (GBN News): As has been widely speculated, the release of two jailed reporters was not the only reason for former President Bill Clinton’s recent trip to North Korea. According to GBN News sources, Mr. Clinton also carried an urgent message from President Obama to North Korean leader Kim Jong Il, looking to secure his support for the NY State Senate bill renewing Mayoral control of the NY City schools. The bill’s easy passage yesterday is seen as proof that this second objective of the former President’s mission was as successful as the first.

While some have questioned why local school control would be the subject of international diplomacy, this is not the first time the Administration has injected itself into this issue. In June, Education Secretary Arne Duncan personally advocated for an important aspect of Mayoral control. But President Obama apparently felt that he needed to broaden this lobbying effort.

The benefit of Mr. Kim’s involvement is obvious. As a bona fide member of the Axis of Evil, he carries with him a large intimidation factor, which could sway the votes of fence sitters who might be wary of North Korea’s nuclear capabilities. And the North Korean leader clearly derives a boost to his international prestige by partnering with a like minded autocrat such as Mayor Bloomberg. But how Mr. Clinton came to be involved was another story.

According to sources close to the former President, the trip was originally planned solely to free the two reporters. However, prior to Mr. Clinton’s departure, a group of workers from Eva Moskowitz' Harlem Success Academy entered the Clinton offices in Harlem and began changing locks and moving out furniture and equipment. When they told the former President that they were there to set up a new charter school, Mr. Clinton angrily demanded an explanation from Mayor Bloomberg. The Mayor referred him without comment to Secretary Duncan, who told Mr. Clinton, “We just need you to do the President a small favor. Get Kim to support the Senate bill, and all those nasty people in your office will go away.”

In a related story, a spokesperson for the Mayor categorically denied reports that Mr. Kim is in line to replace Schools Chancellor Joel Klein after the Mayor is re-elected. “Not tough enough” was the only reason given.
Posted by Gary Babad at 8/07/2009 11:15:00 AM

I love it - your humor and wittyness are greatly appreciated!
-Ken