No Canine Left Behind 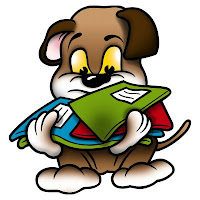 August 13, 2009 (GBN News): The NY City Department of Education is struggling to accommodate a new and unexpected influx of students enrolling in the city schools for September. While financially pressed parents have already been transferring students from costly private schools, recently another group of students has started to come into the system, this time from obedience schools.

A top DOE official attributed this sudden spike in enrollment to a widely circulated blog, which suggested that even a dog can pass the standardized tests required to be promoted in the city schools. Apparently, dog owners frustrated by their pets’ lack of progress in traditional obedience schools are hoping that the laxer standards at the DOE will afford their pooches a better chance to graduate.

The DOE had initially tried to prevent the dogs from being enrolled. But attorneys for the ASPCA were successful in arguing that nothing in the DOE regulations specifically prohibits dogs from attending city schools, provided that they reside within the five boroughs.

However, this may be a case of “Be careful what you wish for.” Dr. J. Fredrick Runsford, Dean of the School of Veterinary Medicine at Manhattan University, told GBN News that the ASPCA may have a change of heart when they see what sort of conditions the dogs will have to endure in the schools. “Overcrowded and alternately sweltering or freezing classrooms, lack of time in the schedule for lunch periods, abusive school safety officers,” Dr. Runsford pointed out. “Those things would actually violate a whole bunch of animal rights laws. They may conclude that the dogs would be better off back in the kennels.”

In a related story, a DOE spokesperson would not comment on a report that the Department had signed a no-bid contract with the Purina Company making them the exclusive supplier of school lunches for the 2009-10 academic year.

thank you Gary for breaking this important story. Too bad our kids don't have any groups like the ASPCA looking out for their interests!