The NY Times misreports yet another important education issue, this time as regards charter school construction. See our previous attempts to correct the record in their recent article on test score increases in NYC schools here and here.
As in the previous article, they uncritically buy the administration’s PR, and in the process, make several important factual errors.
The news that the administration was prepared to spend city capital funds to build new charter schools, despite the fact that the city receives no reimbursement from the state to do so, was first broken in June by Yoav Gonen of the NY Post here. 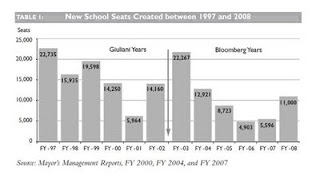 ----
to: nytnews@nytimes.com
Dear Editors:
Your article from August 19 re charter school construction is replete with misinformation. First, the reporter writes: “School building in general has exploded in the last five years…..”
Correction no. 1: School construction has not "exploded"; in fact more school seats were built during the last six years of the Giuliani administration than during the first six of the Bloomberg administration.
See the chart above, from a chapter in the recent book, NYC schools under Bloomberg and Klein: What Parents, Teachers and Policymakers Need to Know. As noted, the data comes directly from the Mayor’s Management Report.
And the new five year capital plan further cuts the number of new seats by 60% -- which will provide only approximately one third of the space necessary to eliminate overcrowding and reduce class size to state-mandated levels.
Three different reports, from the NYC Comptroller’s office, from the Manhattan Borough President, and from the Campaign for a Better Capital Plan, a consortium of advocacy groups, public school parents, and unions, all have pointed out how school construction has lagged considerably behind the need to eliminate overcrowding, reduce class size and meet our growing school-age population.
Correction no. 2. “…since the School Construction Authority for New York City financed about $13 billion worth of projects, some of them charter schools. In June, an additional $11.3 billion was allocated for public school construction over the next five years.”
Of the $13 billion in the previous capital plan, only $4.7 billion was allocated for public school construction. The rest went to maintenance, repair, facility enhancements, environmental remediation, technology (including for ARIS, the supercomputer used to crunch test scores) and other ancillary uses.
Moreover, of the $11.3 billion in the new capital plan, only $3.8 billion is for school construction.
Correction no. 3: “If they plan to build in neighborhoods that need more schools because of population growth, charter schools may now apply to dip into a $3.8 billion pool of state money for school construction.”
Actually, the $3.8 billion is not state money for school construction, but the amount of city funds allocated to school construction over the next five years, as noted above.
Moreover, though the state does provides 50% reimbursement for every dollar the city spends to build new regular public schools, the state does not reimburse the city for any funds spent on charter school construction.
Indeed, the reality is the reverse of what this statement implies. The fact that the DOE is now prepared to allocate a portion of its limited capital funds to build new charter schools with no reimbursement by the state, indicates that they are prepared to spend twice as much per seat for charter school students than for regular public school students.
Correction no. 4: the quotation from the head of the Center for Charter School Excellence: “As a result, charter schools often lease buildings or they start operations in unused public school space, he said.”
Unused public school space? This is incorrect. Perhaps you should have asked some of the parents or staff at PS 123, or one of the other many regular public schools that have lost classroom space and cluster rooms to charter schools over the last five years. These controversies have been widely reported in recent months, even occasionally in your paper, and should have been mentioned here.
I trust you will print these corrections ASAP.
Thanks,
Leonie Haimson
Executive Director, Class Size Matters
Posted by Leonie Haimson at 8/21/2009 05:18:00 PM

Do you ever wonder, when you read the Times--if the national and international pages offer the same misinformation as the education pages, how will we ever find out what the heck is going on in this world?

Me, just to round things out, I read Gary's columns. But frankly, I'm not 100% convinced even he is telling me everything.

To paraphrase from an old Tom Lehrer political satire: Should any GBN News item prove to be inaccurate, I will not only print a correction, I will deny under oath that I ever wrote it in the first place.