The hiring crisis in our schools: what brought us to this point? 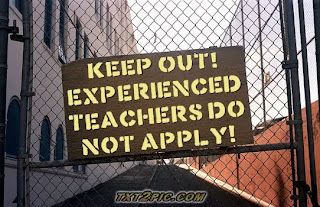 The Times performs a double whammy today by running an editorial in favor of the Race to the Top proposals; featuring a direct attack on the teachers unions for opposing tying the evaluation of teachers to standardized test scores: Editorial: Accountability in Public Schools.
The paper also features an article, Amid Hiring Freeze, Principals Leave Jobs Empty , about how principals are refusing to hire experienced teachers on ATR (absent teacher reserve) – of which there are nearly 2,000 -- despite 1800 teaching openings. Instead, principals are hiring new teachers as “permanent” substitutes, waiting out the hiring freeze that Klein announced a few months ago. What the article fails to discuss is how this is a crisis entirely of Joel Klein’s making, and represents one of the biggest management blunders of his career.
Klein has continued to pay for Teach for America and the Teaching Fellows program to recruit new candidates long after it was clear that a huge pool of experienced teachers was growing, who are being paid full salary and yet have no regular classroom assignments-- through no fault of their own. In the article, no mention is made of what led to this crisis: how Klein changed the school funding system, under the advice of Sir Michael Barber, a management consultant from McKinsey and Co., whose advice to the Blair administration to impose a similar scheme in the UK had earlier caused massive teacher layoffs and what was described as the most serious educational crisis in that nation’s post-war history.
NYC’s so-called “fair funding” system was specifically designed so that for the first time, principals would have to pay for their own staffing of teachers and for their full salaries, to give them an incentive to hire new, cheaper teachers rather than experienced ones. Many critics warned that given budget cuts to come, the refusal of DOE to fund teachers centrally -- as opposed to say, school achievement facilitators, data inquiry teams or parent coordinators, all of which is directly financed by the administration -- would lead to principals being forced to choose between larger classes and less experienced teachers, and this is exactly what has occurred.
See, for example, our exchange with Robert Gordon, who designed the funding system for Klein, in March 2007, and earlier comments from Noreen Connell and Gordon in a Times article from Jan. 27, 2007, Seeking Equity, School Chief Outlines a Financing Plan:
The expert, Noreen Connell, who leads the Educational Priorities Panel, a nonprofit group, said that the changes would initially make the budget system more complicated, and would be harmful long term by making it overly expensive for schools to retain veteran teachers.
While the new plan would provide money to schools and require principals to cover payroll and other expenses, Ms. Connell said in an interview that she preferred a system that seeks to calculate a school's staffing needs and then provides the dollars to meet them.
''The funding proposals,'' she wrote in commentary posted on the group's Web site, ''have the potential to do lasting damage for decades to come.'' In the interview, Ms. Connell also said the chancellor did not have time to carry out the plan before the end of Mr. Bloomberg's term in 2009. ''They won't be around to suffer the consequences,'' she said.
Robert Gordon, the Education Department's managing director for resource allocation, who is designing the new system, said it would maximize the amount of control that principals have over their budgets, allowing them ''to retain their most experienced teachers if that is what they want to do.''
Why should the school funding system be designed to force principals to choose between hiring or retaining experienced teachers and smaller classes – when these are among the few factors that have been proven to result in better schools ? Do public schools in the suburbs have to choose between these goals, or the private schools to which Klein and Bloomberg sent their kids?
The article also omits its own reporting of the fact that there has been a decrease of 1600 in the number of classroom teachers under this administration, with a concurrent rise in ten thousand out of classroom positions, including two thousand more school secretaries.
The only thing incorrect about Noreen Connell’s predictions in 2007 is that we may be saddled with Chancellor Klein for years to come, because of Bloomberg’s overturning of term limits. Robert Gordon has now moved onto the Obama administration, where he is probably designing similarly destructive funding schemes on a national scale. Sadly, the Educational Priorities Panel, one of the few objective monitors of DOE’s spending practices, is gone, apparently because the NYC foundation world didn’t see the point in supporting the sort of expert analysis that EPP was able to provide.
Posted by Leonie Haimson at 8/29/2009 12:15:00 PM

We are told by the DoE and the UFT to look for jobs. But how can we when the official transfer login site
https://www.nycenet.edu/offices/dhr/transferplane/apps/login.aspx

has the following "need not apply" message?:

A cookie must indicate that my PC belongs to an ATR, because this subtitle appears early in the webpage:
Excessed Staff Selection System - Sign In

Activists and reporters need to know: we can't apply to schools even if we want to. This flies in the face of official policy saying that ATRs have priority.

Hi there just to let you know about a video by Professor John Seddon that slams Barber's ideas with evidence.