The NY Times response, and my reply 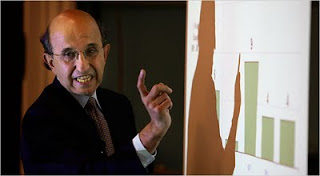 See the response from the NY Times editor below to my critique of their test score article yesterday – and my reply. Read from the bottom up. See also this front page story from the Times from November 16, 2007 – in which, in opposition to the paper’s current stance, it was clearly stated that there were no significant gains in any area but fourth grade math since the Bloomberg/Klein reforms took hold:

“The national scores also showed little narrowing of the achievement gap between white students and their black and Hispanic counterparts. The results for and 10 other large urban districts on the federal tests, the National Assessment of Educational Progress, paint a generally stagnant picture for the city, although there are gains in fourth-grade math.”

Why have they changed their story now? If you’d like to chime in, please do! You can ask for a correction at nytnews@nytimes.com; write a letter to the editor at letters@nytimes.com, or email the public editor at public@nytimes.com

Amazingly, the same testing consultant who was quoted in yesterday's NY Times as saying the state tests are “about as good as we can build them” is quoted in today's Gotham Schools that "“It’s hard to trust the data right now."

Thanks for responding. The broad evidence that the state test scores are inflated is clearly relevant to the Times reporting here and was totally glossed over.

Not one independent expert was quoted as to this issue – only those who have a strong interest in claiming credit for improvements, including the head of SED’s test advisory committee, the head of the Regents and the Chancellor himself. This is not balanced reporting. In fact, the headline that refers to “critics” is rather strange, when not a single legitimate critic is cited.

As I’m sure Elissa is well aware, there are many prominent administrators, researchers, teachers and principals who believe strongly that there has been rampant state test score inflation in recent years. Not only are huge jumps in the scores occurring in nearly all districts and in all grades– the middle grade increases last year were especially unprecedented -- but as has been widely reported in the Daily News and elsewhere, the cut scores have been lowered each year. To leave this out of your story seems negligent at best, especially given the room and the time your reporter had to expound on this issue.

Moreover, the lack of progress on the NAEPs in NYC provides a natural audit of the reported rise in state test scores.

As to whether or not the 2003 increases could be attributed to the leadership of Bloomberg and/or Klein, you are surely right that “It is not incorrect to say that fourth grade reading scores rose after the mayor took over. You are correct that some of the biggest gains occurred before his major reforms took effect, but we are not incorrect.”

But perhaps you might have mentioned the latter statement in your story!

Or, if you are implying instead that the increases in 2003 could be legitimately due to the Bloomberg/Klein leadership, as the administration is desperate to claim, the NY Times seems to have flipped positions. As was widely recognized at the time, by your own reporting staff, the 2003 gains were quite uncomfortable for Klein et. al. when they first occurred.

Let’s take a little trip back in time.As has recounted:

“The Legislature approved mayoral control legislation in June 2002, and Chancellor Klein assumed office in August 2002. He spent the next six months conferring with consultants. He and the mayor announced their plans and their pedagogical choices in January 2003. At that very time, students in the city and state were taking the state tests. The chancellor had done nothing in the schools prior to January 2003 to raise student achievement. His reforms were introduced into the schools in September 2003. Thus, it is inappropriate for Dr. Bell-Ellwanger [or any DOE official, as they have recently claimed] to take credit for any gains registered on the state tests that were administered in January 2003.”

This reality was well recognized at the time, by both the Klein administration and the NY Times reporting staff.

As David Herszenhorn wrote in the Times when the state ELA scores were first reported on May 21, 2003:

“The city's positive results come at a time when Mayor Michael R. Bloomberg and his schools chancellor, Joel I. Klein, are trying to overhaul the public school system and impose a uniform reading and math curriculum at all but the highest performing schools.

City officials, who might otherwise have been jubilant about yesterday's results, offered a muted reaction, saying that the gains were not broad enough and that the school system as a whole was still failing at least half the city's children.;;

''Although we are pointed in the right direction, there is still a lot of work that needs to get done,'' said a deputy schools chancellor, Diana Lam. ''Even with these gains, we have one out of two students that are not fluent readers at the fourth-grade level.''

Experts said the sharp increase in test scores could prove problematic for Mr. Bloomberg and Mr. Klein, since it is too early for them to take credit and sets a benchmark for next year that may be hard to match….

The higher scores, particularly at schools that have showed sustained increases since 1999, also gave new ammunition to critics of Mr. Bloomberg's changes, who said that they might do more harm than good by disrupting existing programs….

And he quoted some of these dissenters, which at the time included Norm Fruchter and Randi Weingarten, as saying that the scores instead resulted from the reforms introduced by the previous Chancellor, Rudy Crew.

Of course, Klein and company are now quite eager to take credit for these 2003 gains – which as regards the 4th grade ELA NAEPs, show the only significant improvements since Bloomberg took office. But this revisionist history is hard to square with your paper’s own past reporting.

Let's see how Elissa Gootman herself reported the state math gains when they were released on October 22, 2003:

“Fourth graders across the state made stunning gains in their math scores last spring, with even sharper increases in New York City…In the city, news of the gains, which were particularly pronounced in the Bronx and in some of the poorest-performing districts, elicited cheers among teachers and principals. But not everyone greeted the news so enthusiastically:

The suggestion that city schools were on the upswing put Chancellor Joel I. Klein, who is overhauling them, in a tricky position. While the chancellor’s critics pounced upon the higher scores as evidence that the school system did not need such an overhaul, some of his allies acknowledged that he would now be under even more pressure to show gains next spring.

''While I am gratified by the test results released today for fourth and eighth graders in , I must emphasize that it is hard to tell the true significance of any one set of results in isolation,'' the chancellor said in a statement. ''We must always look at results in comparison over a number of years. Only through comparison can we truly measure the progress we're making.''

That’s true of course. And there has been no significant improvement in the NAEPs in the years since – except in 4th grade math [in which there was a 25% exclusion rate].

Since the NAEPs are widely seen as the gold standard “audit” test, admitting that you didn’t see the need to report in any depth on NYC’s lack of progress on the NAEPs is like saying you can report a story on the DOE’s finances without seeing the need to mention any of the numerous audits from the State or City Comptroller’s office that reveal widespread waste on the part of DOE, including misappropriation of state class size funds, huge growth in private contracts with 20% going over budget, and repeated awarding of no-bid contracts, without registering or documenting their rationale.

But that’s another story…..perhaps you might look into the no-bid contracts for Agudath of Israel, with the amounts awarded the organization by DOE dwarfing what the Times’ political reporters wrote about today in relation to the Mayor’s use of his discretionary funds.

We appreciate the attention you've given to this story, as much as we've appreciated your being a source for us over a number of years.

We do not, however, think that your email points out any inaccuracies. It is not incorrect to say that fourth grade reading scores rose after the mayor took over. You are correct that some of the biggest gains occurred before his major reforms took effect, but we are not incorrect.

Indeed, there are many interesting and important ways to look at the NAEP results, but the NAEP comparison was one small part of this report; we could not devote unlimited space to it given the parameters of this article, which is about the city’s performance on state tests. We therefore included a very broad, basic summary of the NAEP results.

We also, unfortunately, do not have the most recent NAEP results, but you can be assured that we'll report them in full when we get them.

As for whether the tests themselves are deficient, I think the article discusses that, perhaps not with the depth you are seeking, but as with the NAEP, we cannot go down every road.

It's the Walter Duranty school of journalistic accuracy.

You've been a source for them over the years - Leonie, you deserve a byline.