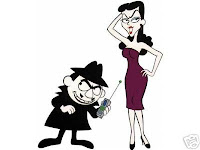 July 12, 2010 (GBN News): Ten Russians recently deported from the US for spying were apparently not the only such agents living here undercover. GBN News has learned that at least one more Russian plant remains in this country but was not publicly exposed.

According to Russian intelligence sources, the eleventh agent is a high profile American billionaire philanthropist. The sources, who go by the pseudonyms Boris and Natasha, told GBN News that this individual had been secretly placed in the US during the Soviet era. His mission was to amass an immense fortune, then use it to undermine the American way of life. Even after the fall of the Soviets, he continued to fulfill that role, using billions from his charitable foundation to destroy the US public education system by promoting unproven, radical educational “reforms” like replacing public schools with charter schools, and sabotaging the careers of experienced teachers by basing their evaluations on questionable data such as students’ test scores.

The individual had reportedly been on the verge of exposure last week along with the ten others, but got a last minute reprieve through the intervention of Education Secretary Arne Duncan. The Secretary was able to convince President Obama that exposing the plot could derail Mr. Duncan’s signature “Race to the Top” program, which has relied largely on funding and support from philanthropists like this one. Mr. Duncan argued successfully that just as RTTT is more important than saving thousands of teachers’ jobs, as Mr. Obama has indicated, it should certainly take precedence over a matter as trivial as international espionage.

While the Administration is proceeding with the attitude of “no harm done”, others see cause for concern. J. Fredrick Runson, head of the International Affairs department at Manhattan University and an expert on educational espionage, told GBN News, “If he remains on the loose, this guy could be the most dangerous man in America.”

GBN News has thus far been unable to learn the identity of the individual or which foundation he heads. A spokesperson for the Bill and Melinda Gates Foundation, when asked by GBN News if Mr. Gates has any knowledge of the Russian plot, said simply, “Nyet”.
Posted by Gary Babad at 7/12/2010 11:26:00 AM

Government sources have also revealed that this agent has received immeasurable help from a double agent/mole working within the targeted public school systems.

The government sources would not name this double agent, merely referring to them by the initials "RW."

Top secret transcripts, allegedly leaked to and then improperly discarded by the NY Post, suggest the illicit capture and interrogation of a UFT delegate by an unknown organization highly expert in Microsoft software, yet with a penchant for Apple products. When an interrogator repeated the words 'fight smart' three times, the delegate began to whir, overheat, smoke, and capitulate without a qualm.

Doesn't "RW" stand for Rotten Witch if you know what I mean!