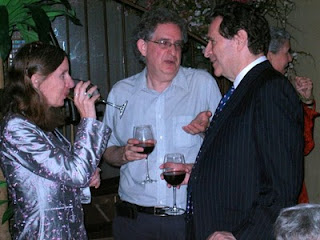 In a violation of his exclusive contract with the NYC Public School Parent blog, Gary Babad has published a exclusive report on the Washington Post blog about the appointment of a new Superintendent of DC schools.

We dragged Gary out of obscurity and propelled him to fame and fortune, and this is how he repays us? (Okay, there was no pay involved, but still!)

Gary's photo is at right, at the Class Size Matters fundraiser in May, talking to famed attorney Norman Siegel and to me; an occasion in which he never even hinted at his future betrayal.

As punishment, we are sending to the bowels of the building to head their PR department, otherwise known as the NYC Department of Education press office.

This department is short-handed because of much turnover in recent months; and it's obvious they need help with their spin control. (The new hires haven't even managed to subscribe to our NYC education news list yet, the first step in any genuine attempt to control the news.)

For example, last week, when a press spokesperson tried to explain the lack of action for five years in a DOE investigation into the misconduct of a principal, recently shown to have misused funds in an audit from the State Comptroller's office, the excuse was that "Our lawyers are very thorough."

More recently, a DOE press spokesperson fed the absurd line to an Ed Week reporter that the DOE "is poised to introduce online credit-recovery options for students this coming school year in 10 schools" and then, only when a teacher is present.

Meanwhile, we know from numerous news articles that credit recovery is pervasive throughout the city, and credits are being handed out like candy to students, through cut-and-paste online programs, even when they failed to attend their classes and had flunked their courses.

We also know through DOE's own job postings and RFPs that online "learning", as they call it, is being used in at least 42 schools this year, with a plan to spread the discredited practice more widely next year, through "multi-million dollar online learning technology development projects" to be utilized during and beyond the school day - from home, library, or anywhere students have access to online resources.""

And in today's Daily News, this is how the DOE press office explained their decision to grant tenure to a principal, two days after a girl had drowned on a field trip at his school, a trip which had occurred without adequate supervision and permission slips:

"In the heartbreaking days following Nicole's death our primary focus was not on the tenure status of officials," said Education Department spokeswoman Natalie Ravitz..

As Steve Koss, contributor to this blog pointed out, "such a statement is ridiculous and belied by their own actions, since it certainly didn't take them long to focus on the employment status of the teacher (now fired) and the AP (now demoted from administration back to being "just" a teacher.)"

We're sorry, , that we have to demote you to heading the press office at , but at least at DOE, you can be assured that poor performance and/or misconduct are not punished, but are rewarded with a higher salary and assurances of lifetime employment.

Leonie, I don’t know how you managed to uncover my Machiavellian plot. I never thought anyone would see through this one. For years, I’ve been waiting for a call from the DOE to offer me that PR job. I was counting on that $250,000 a year salary so I could emulate the life style of my heroes, Bill Gates, Michael Bloomberg and Bernie Madoff. I even made a down payment on a limo, so I could travel to the subway in style like Mike does. But finally I realized that they would not hire me of their own free will; they were just too envious of the fact that I kept coming up with their ideas before they did. So I realized that the only way to get that job was to find a way to be demoted into it. And so, finally, I can now afford to travel in the circles of those who until now I was only able to parody. Billionaire Boys Club, here I come!

Well, please don't forget us little people when you're sitting on your throne at Tweed. And you're welcome to come back and contribute to us any time.

....Looking for the word Parody- Help me find it......Gary, you are the best writer in the Art Buchwald, Erma Bombeck league.....go for the Gold, not the gold plated!