IT'S NOT ABOUT THE TESTS! 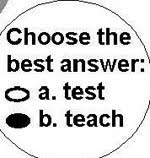 Over the last ten days, at least a portion of the long-known truth about the ineffectualness of the State's Grade 3 - 8 standardized Math and ELA exams and high school Regents exams has finally being acknowledged by the NYS Board of Regents and the local print media (New York Times and Daily News and NY Post). By way of validation, newspaper reports today indicate that the re-measured proficiency rate of NYS and NYC students is far, far lower than has been repeatedly claimed and ostentatiously touted by state and local politicians, particularly in NYC.

Calls for "new and improved" examinations with realistic cut scores that more honestly assess proficiency as a measure of academic readiness for higher level study are certainly not unwelcome. After all, if testing is a devil we have to live with, at least it can be a devil with a little more integrity, one that serves educators as well as students and their parents as a more accurate gauge of academic progress and readiness. It is difficult to oppose a movement toward more honest and realistic assessment; this writer for one is not opposed in principle.

Be that as it may, this ostensibly good news must be tempered with reminders of a harsh reality: the real issue has never been about the test scores, but how they are now (mis)used at every level of the educational and political hierarchy. From NCLB and Race to the Top to state-level departments of education to local school districts, from mayors (cough, cough) to school superintendents (cough, cough again) to principals, from assessing principals and teachers to closing schools, from drill and kill and teaching to the test to shorting other curricular areas, and from incentivized, institutionalized manipulation to outright fraud and cheating, the abuse of standardized testing has reached such epidemic proportions throughout the country that public school education in many places is hardly recognizable any more.

Standardized test scores have become the scourge of the American education system. In New York, simply reconstructing the exams and raising the cut scores will do nothing more than address a symptom, one reflected in overly generous assessment of students' academic progress and readiness. While the change is needed, it will also conveniently eliminate a major structural criticism of the current education reform movement that those "reformers" will be happy to see removed; it's not for nothing that the New York Times, NY Daily News, and NY Post editorial boards jumped on the "revise the NYS standardized exam bandwagon" so quickly and enthusiastically. That alone should warn everyone of the underlying reality of this situation and their agenda. To wit: test, test, and test some more; measure, measure, and measure some more; incentivize and otherwise hold teachers, principals, and entire schools accountable based on those results.

The yardstick may end up being different, but schools will still be driven toward all the ills of score inflation. As long as people like Joel Klein insist that a single, annual exam (or any number or combination of exams) can determine everything from a child's readiness to a teacher's worthiness to a principal's evaluation to whether a school should be closed, the institutionalized response will inevitably lead to the same place we're at today: score inflation, teaching to the test, altering curricula and classroom time allotments to what is being measured and to the detriment of everything else, favoring repetition and drill over exploration and creativity, systemic cheating, manipulation of data, etc.

Perversely enough, under the current "test, measure, incentivize, and hold accountable" regime, revising the NYS exams and making them more honest but more difficult may damage public education even more than the current system has done. Why? When the tests were easier and more predictable, teachers at schools with higher percentages of on-track students could accommodate the state exams while largely pursuing the curricular and instructional approaches they felt best motivated and engaged their students. The more difficult the exams, ceteris paribus (all other things held equal), the more time and effort teachers may feel required to devote to teaching to the test.

The Times, Daily News, and Post will welcome revised, more academically honest standardized exams with open arms; these cheers represent little more than a classic example of "audience misdirection." Mayor Bloomberg will shuffle and dissemble over the collapse of his educational house of cards built on exam scores now acknowledged as meaningless while likely belittling those who dare question him. Chancellor Klein will do a rationalizing dance by claiming that even though the exams were worthless, NYC still did better on them than Rochester, Buffalo, or Syracuse. Change for the better will be promised and touted, but all the upbeat focus on the superficial (the content, form, structure, difficulty, and cut scores of the exams) will merely mask the deeper, more fundamental issues, the ones the education reform crowd would rather not talk about.

Just remember -- it's not, and never was, about the exams, but about they are used. Or more accurately phrased, misused. Since that shows no current prospect of changing, little else among the many ills being inflicted on American public education by the misnamed "education reform movement" is likely to be addressed.

After all, consider that the Times today quotes NYS Education Chancellor Merryl Tisch as stating: "Now that we are facing the hard truth that not all of the gains were as advertised [providing significant evidence that she must have spent the last five years living in the Antarctic], we have to take a look at what we can do differently. These results will finally provide real unimpeachable evidence about to be used for accountability (italics mine)." Not diagnosis of students strengths and weaknesses, not teacher self-assessment, not revision of time allocation to address areas of widespread, persistent weakness, not quality of curriculum, not readiness for high school or college. Just accountability, and more of the same!!!

Above all, we cannot let the "leaders" get away with: "We did not know, but now we do know and we will fix it."

IF THEY DID NOT KNOW, THEY ARE INCOMPETENT.

Joel Klein based numerous decisions on test scores now admitted to be flawed. In other words, this so-called smart lawyer was unwittingly gulled into accepting measures now widely discredited. The only possible conclusion is that he is either an idiot or a liar.

Personally, I go with the latter. Arne Duncan even admitted it: "We are lying to are children."