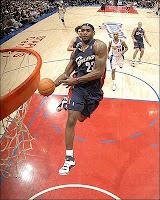 July 8, 2010 (GBN News): The LeBron James saga took an unexpected turn today when, in a desperate attempt to bounce back from a mediocre season, the New York City Department of Education made a last minute push to lure the free agent star to the DOE. GBN News has learned that Chancellor Joel Klein and Mayor Michael Bloomberg hosted Mr. James last night at the Mayor’s posh East Side home. In an hour long Powerpoint presentation prepared by the DOE publicity department, he was shown how by playing ball with the DOE, he can realize his dream of making a billion dollars far faster than by merely playing for an NBA team.

Mr. James was reportedly wowed by the Powerpoint, which went through the myriad of ways that big money can be made through an association with the DOE. While he found possibilities such as no bid computer consulting contracts and vending machine deals very appealing, he was said to have been particularly impressed by the fortune that can be made in charter schools alone. And lest he worry about conflict of interest, Mr. James was assured that working for the DOE would in no way disqualify him from running his own chain of charter schools in New York.

In addition to lending star quality to the DOE, a James signing could significantly enhance New York’s chances of winning Race to the Top money. Chancellor Klein is said to believe that Education Secretary Arne Duncan, a rabid basketball fan, would look favorably upon a school system that boasted a star such as Mr. James.

Mr. James’ decision will be announced tonight on ESPN. Sources close to the free agent told GBN News not to read anything into the fact that the announcement will be made from the steps of Tweed Courthouse, the DOE headquarters.
Posted by Gary Babad at 7/08/2010 09:14:00 AM