Taking the stage today at the AFT convention in Seattle... 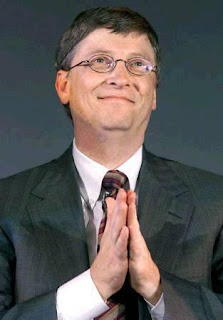 The most dangerous man in America.

Nothing really new here: The use of force and oppression through money. We agree to being part of a large corporation, we sell our souls, cheaply, to people with hyped up bankrupt ideas for which they will fake progress and then laughably call fruitful experimentation.

His ruse only works because people at the top are not looking out for the public at large. I think NYC Educator's right, they're looking to eliminate the middle class, or more specifically, catering to the upper-middle class while creating a lower-middle service class. You can see where that's going.

Predictable. Here's a recap of Gates' speech from the Seattle Times:

I'm ashamed to be affiliated with a bunch of faux-robots who applauded a man who'd just as soon replace them with real ones.

Using the Gates Foundation, Bill, Melinda and Microsoft maintain pharmaceutical patent investments, tobacco investments, investments in alcoholic beverages, petroleum investments, investments in experimental and controversial crops, and even investments in news/media. Gates need not even pay tax; being such a major investor even in governments, politicians can in turn be persuaded to buy from Microsoft and have this dependence/lock-in cascade down to businesses and homes.
We have provided extensive evidence for the claims in many past summaries which include the following (in chronological order).