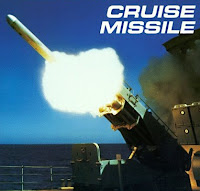 March 23, 2011 (GBN News): Responding to criticism that he is neglecting his domestic agenda in favor of foreign intervention, President Obama today ordered a massive cruise missile attack on public schools. The assault was said to be aimed at taking out teachers’ union defenses by surgical strikes on the classrooms of the most senior teachers.

Press Secretary Jay Carney told reporters in his daily briefing that the attacks are not aimed at the schools per se. “The President’s goal”, he said, “is simply to protect ‘great teachers’ by eliminating the sanctuaries of the ‘defenders of the status quo’.”

Education Secretary Arne Duncan was said to be the main driving force behind the President’s bold action. He reportedly argued persuasively to the President that, “To bring about real education reform, Bill Gates can make better use of the missiles than Bob Gates."

In an exclusive interview with GBN News, Mr. Duncan gave his assurance that no teachers would be physically harmed. “The strikes are being carried out a night, when schools are closed,” he said. “The teachers will simply come in the next morning and find they do not have a classroom. They’ll be forced to go home and find another career.”

The Secretary also pointed out that every effort was being made to avoid collateral damage. “Those cruise missiles are extremely accurate,” he insisted. “In no case has there been any damage to co-located charter schools.”
Posted by Gary Babad at 3/23/2011 03:47:00 PM