Send a message about school overcrowding and the $5 billion cut from the school capital plan!

In the press of other news, like rampant budget cuts, school closings, rising class sizes, and harmful co-locations, we have failed to focus on one of the most important issues that will determine the quality of education in NYC schools for years to come: the five year capital plan.

On Wednesday, the Panel for Educational Policy will vote on this plan, which compared to DOE’s previous proposal issued in November, cuts the funding for new capacity over five years by almost $6 billion.

This an extraordinarily large amount to be spending in any one year, especially given the city’s (and the DOE’s) dreadful record with technology projects.

It is also more than twice as much as the $259 million that the DOE plans to spend on building new schools next year. If this plan is approved, there will be very few new seats over the next few years, with only 609 new seats projected for Sept. 2013—the smallest increase in more than ten years, just as our school-age population is rapidly expanding.

This is a recipe for disaster.

The November DOE proposal, which called for 50,000 new seats, was the first under this administration to admit the reality of increased enrollment citywide, resulting in widespread wait lists for Kindergarten and class sizes growing at an unprecedented rates. Though we have been warning of increasing enrollment for several years, the DOE’s official projections wrongly claimed that this would not occur until 2016 at the earliest, although it already started in most districts three years ago, and occurred citywide in 2009.

At the same time, the DOE plans to accelerate online learning, called the Izone, expanding it to 300-400 schools over the next few years, without any independent evaluation of the pilot program that currently exists.

As a recent report warned, the rapid spread of this sort of experimental, expensive program is happening nowhere else in the country:

“NYC school district leaders are taking risks with the iZone, implementing new models, committing deeply to a defined set of principles that challenge core assumptions about what a school should look like, and moving to scale very quickly. How and when they will know if they got the big bet right is a question district leaders will have to ask so that students are not subjected for too long to programs and schools that don’t work. … At some point, the district may get pushback from parents about the idea of having their children participate in unproven programs and may need to consider catch-up academic plans if certain programs are not effective.”

In truth, this plan represents a large scale experiment on our children, with no research to back it up. Already, hundreds of schools have found that the $80 million ARIS was a costly mistake, and are using a far more inexpensive and useful model called Datacation developed by a science teacher in the Bronx, as NY1 has reported.

But the half billion dollars that the DOE plans to spend next year on expanding the Izone will make the $80 million ARIS looks like chickenfeed.

For more on the radical cuts in new seats and the concomitant increase in spending on technology, see my comments on the capital plan in Gotham Gazette.

Click on the chart to the right for the number of seats that will be cut in every borough and in most districts, ranging from 39% in Manhattan, 54% in Queens, 60% in Staten Islan 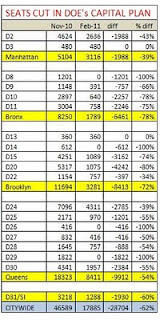 Because the DOE has never published a needs assessment for any district, we cannot know if these cuts are fairly apportioned; all we know is that is this plan is approved, children in these communities will be sitting in overcrowded schools for years to come.

The mayor blames the Governor for proposing a cap on capital reimbursement; and it is true that Cuomo is partly responsible. But the mayor and the DOE are ultimately accountable, because of their refusal at any time during their administration to provide accurate utilization (Blue book) figures, reliable enrollment projections, or a transparent needs assessment of how many seats are actually required to eliminate overcrowding.

Instead, they have consistently hidden the truth and minimized the problem, and continued to pursue damaging policies that have made overcrowding worse, such as charter school co-locations.

To add insult to injury, at the same time the DOE plans to rapidly spread risky virtual learning to hundreds of schools over the next three years, they are refusing to replace the leaky PCB-lights in our schools in anything less than ten years, risking our children’s health and safety.

Please send the mayor, the chancellor, the PEP members and the borough presidents a message now, on the need to expand new seats in the capital plan and freeze spending on technology!

A sample email is below, along with relevant contact information, and room to plug in your own borough and/or district cuts, if you like. But PLEASE do it today. Then come Wednesday to Brooklyn Tech PEP meeting and make your voices heard.

To the Mayor, Chancellor Black and members of the PEP:

Dear Mayor Bloomberg, Chancellor Black and members of the PEP:

The proposed five-year DOE capital plan will cut $5 billion from new capacity, and nearly 30,000 new seats from the version of the plan just released in November. Given existing overcrowding, the rapid increases in enrollment and class size throughout the city, as well as Kindergarten wait lists at many schools, these cuts are simply unacceptable. [My borough of X will be cut by y seats; and my district by Z seats].

At the same time, the DOE is proposing to spend nearly a billion dollars to expand virtual learning to hundreds of new schools, with more than half a billion dollars to be spent on technology next year alone. This is a recipe for disaster, given the city’s record in overspending and waste on technology projects, as well as the fact that the Izone is a risky experiment without any independent research to back it up.

Though the Mayor and DOE blame the Governor for capping the reimbursement for school construction, they are ultimately responsible for this fiasco, for refusing to report accurate overcrowding figures, reliable enrollment projections and/or a realistic, transparent needs assessment of new capacity for our schools at any time during this administration.

As a parent, I ask that you to reject this inadequate plan, which disregards the rights of our children to be provided with a quality education in uncrowded schools with reasonable class sizes. You should also immediately freeze the billion dollars to be spent on technology until an independent analysis of the Izone pilot can be released to the public, and parents and experts can thoughtfully evaluate its results.

Otherwise, you will be risking a huge waste of money on a large-scale experiment on our children, without our consent.

I also urge you to restore the full amount ($5 billion) to school construction and new capacity, and to eliminate all PCB-laden lights from schools over a much more rapid time frame than ten years. If you really care about NYC children, you will agree. In exchange, I promise to work with you to persuade the Governor and the Legislature to raise the cap on school construction.