Why is Cathie Black so unpopular, and why is the DOE scrambling for evidence of parent support? 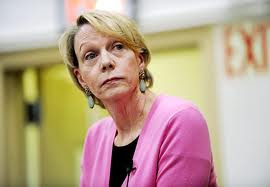 Today's NY Post features a column about Cathie Black's abysmal approval ratings of only 17%; more on the Quinnipiac poll results, including the fact that only 28% of NYC public school parents now approve of Bloomberg, while 61% disapprove of him here.

As to Ms. Black, I think it’s interesting to analyze why her approval ratings are so low.

Nothing she has said or done is objectively worse than Joel Klein, and in a few cases, she seems to have pulled back from some of the most controversial choices that he likely would have made: reversing the closing of PS 114, and deciding to put the KED charter in Tweed for just one year and then give it back to the community for their exploding number of Kindergarten students. In contrast, Klein seemed to relish putting his thumb in the eyes of parents and local electeds.

Moreover, in my view, Cathie Black's public persona is not nearly as objectionable as his was. Truly, she was unqualified for the job, but so was Joel Klein, in every way imaginable. He was a non-educator and a non-manager, and had zero people skills besides .

My speculation is that she is even more unpopular than Klein results from a few developments:

Klein’s approval ratings were always the lowest of any NYC public figure, but for many years, he and Bloomberg coasted on two things: school budgets that were generally increasing each year (though much of the increase was spent on the wrong programs) and rising state test scores (which activists knew were a fraud but managed to assuage most parents that their kids were doing well.)

Then the mayor starting cutting budgets for schools, and last summer, the test score bubble burst. Suddenly, Bloomberg and Klein had nothing to fall back on. Terrible relationships with parents and the community, rising class sizes and overcrowding, policies based on high-stakes testing, school closings and charter co-locations – all of which most public school parents despise, with good reason. And the DOE finally lost all credibility with even those people who don’t spend their time paying attention to what’s really going on.

This is why the DOE is so desperately scrambling for support in the parent community, and, as it was recently revealed, resorted to trying to get parent coordinators to persuade "Happy Harrys" to show up at PEP meetings, rather than the furious parents that normally appear at these shouting fests. They also asked PCs to get parents to sign a petition, supporting their controversial proposal to end teacher seniority protections. Even if parent coordinators tried to gather parent support, they will find it nearly impossible to do so.

Cathie Black, fairly or not, is reaping the results of nine years of wrong-headed education policies, as well as open contempt for the views and priorities of parents. Unless she makes a determined effort to change these policies , I don’t know how she -- or Bloomberg -- can possibly recoup.

What do you think about the reasons for her low approval rating -- as well as Bloomberg's? Please leave a comment below.

When Bloomberg and Klein first started, lots of people were attracted by the "reform" title. After years of no real improvement, it's markedly less impressive. Particularly here in NY, stakeholders in the public school system know precisely what it means. It means Cathie Black, for better or worse, cannot simply open her mouth and get away with spouting the nonsense we've come to expect as a matter of course from Joel Klein.

I think you nailed it very well. In the beginning when Bloomberg and Klein first took over, we initially were okay with their reform movement. We knew that there were problems that needed to be fixed and gave the benefit of the doubt.
Now almost 9 years later, we realize that their reform movement is not working, its harmful to its students and staff and we want change fast.

I think the latest development in their approval ratings is just the beginning of the Bloomberg/Klein/Black downfall. Black may not actually last and possibly resign by the last day of school (we can only hope) but I do not think she will be fired or let go. I think if anything, she will be asked to politely step down.

For the same reason a person who has not practiced law CANNOT serve on law boards or have someone nominated to the Supreme Court who has had no court experience. You wouldn't let a hair dresser fix your car just because she rides in one, right? She is a "fish out of water" and while that may be appropriate for fiction THIS IS REAL LIFE. Get her out before she does some real damage!!

From the beginning when Mayor Bloomberg pronounced Cathie Black as Chancellor her credentials and management history unnerved the skeptics. The early press reports about her diligent study to get her up to speed so she could hit the ground running did not impress anyone. In fact Chancellor Black is still hovering and wavering on many crucial decisions to be made.
However that is precisely why Mayor Bloomberg chose her. If she was too charismatic she would steal the spotlight and if she knew too much about education she would certainly disagree with his management style.

I want to debate Cathie Black in front of a forum of educators. Topic...Lying, Cheating, and Stealing.

I believe everbody sees her as Bloomberg's puppet and she is clueless to what is going on and the public has had enough of it.

Cathie Black is a Bloomberg puppet and is way over her head in being a Chancellor.

To think she will change is like waiting for it to snow in July.

Why is she so unpopular? She's kind of like the vile Yolie Flores, unqualified John Deasy, and Generalissimo Francisco Franco all rolled into one.

Black is horrible, as was Klein. I think everyone writing here, and everyone reading probably agrees.

Bloomberg and the ed reformers probably think both Klein and Black were wonderful.

But somewhere in between are a large handful of folks who think worse of Black than of Klein.

Do you know anyone like that? Anyone who was cool on Klein but hates Black? I don't.

So I am left guessing what makes those people tick. And I remove one subcategory (rational reasoning) from the characteristics of that group.

I'm thinking the Bloomberg-fatigue plays a role. But I also think (and this is not meant to engender an iota of sympathy, both Klein and Black? rotten), but I also think there may be an element of sexism.

Well, Bloomie could, in the theoretical sense, step back from his deforms and control and allow people to actually fix what he has been breaking, OR he could continue to destroy everything, shoot himself and his sleazy cohorts in Tweed in the feet and continue to expose himself and those cohorts for what they are.

Anyone in possession of reason and social conscience knows Bloomie is in deep moral debt.