This week, the real reformers finally broke through! 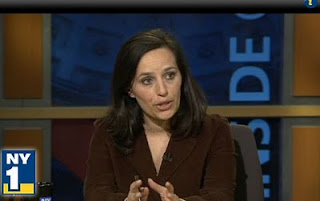 On Thursday night, Diane Ravitch with her usual incisiveness pointed out the importance of poverty and the unfairness of teacher-bashing on Jon Stewart’s the Daily Show.

According to Valerie Strauss' Answer Sheet, Ravitch’s book shot up from #758 on Amazon's list to #35 by the next afternoon.

Jon Stewart showed a short clip of the segment on Fox News debate, to ridicule the commentators’ attack on the “greed” of teachers, while defending the huge bonuses and salaries of Wall Street financiers and bankers whose irresponsible behavior caused the economic collapse in the first place.

“He misinterpreted his mandate…This idea that we’re tying teachers’ salaries to how their kids are performing do on tests. That kind of mechanistic thinking has nothing to do with higher order thinking; we’re training them, were not teaching them.”

Julie Cavanagh, NYC public school teacher and one of the leaders of the Grassroots Education Movement (GEM), was brilliant on NY1's Inside City Hall, pointing out the importance of teacher experience (and class size), in opposition to the push by Mayor Bloomberg and Michelle Rhee to eliminate seniority protections for teachers.

The New York Times, the home of conventional wisdom, featured an extended article about how the scapegoating of teachers has gotten out of hand. (See also FAIR's critique of the article's claim that teachers are actually scorned by the majority of Americans, rather than simply by those in power.)

Thursday's To the Point, a national NPR radio show, also featured Diane, Kay McSpadden, a teacher from South Carolina, and I. Ms. McSpadden said that many people in her state regularly blame the teachers union for the poor performance of their schools, yet there is no teachers union in South Carolina!

A perfect example of how with the collusion of the media, the corporate CEOs and the elected officials whom they control have conveniently created a fictional bogeyman, as a distraction from the real problem that afflict our schools: rampant budget cuts, inequitable funding, large classes, lack of parental input into decision-making, and an overemphasis on testing and privatization.

Let’s hope this is just the beginning of a reversal in which the real educational reformers will finally get a chance to present their perspective in the major media, and the privateers are no longer able to monopolize the airwaves through their wealth and influence – though they have no research and no common sense to back them up.

The clip of Matt Damon on CNN is below:

We, educators, are owe you all a debt of gratitude. Most of us do recognize the need for reform and are anxious to do our part. We can only hope that voices like those mentioned here are heeded in the reforms that are made to the system. Please keep fighting the good fight.

They sure did, and we are so glad.

In defense of Matt Damon, who recently took a cogent and principled stand against this administration's reactionary neoliberal education policies. In response, many HuffPost readers unleashed vicious invective against him. Rather than defending education policies that originated from Heritage, Fordham, and Hoover, we should be advocating progressive education policies and curriculum.

Because what they believe is true.

You might find some insights in a blog about NYC schoolkids and reading.

If reading were taught above all,until each child could read easily, all the over-talked-about problems would vanish.

This shows how smart, dedicated and honest our educators are- they are light years ahead of Weingarten and Mulgrew whose only motto every day is: "Where's Mine?"
Teachers dont have a contract because Weingarten knifed Bill Thompson the way she knifed Carl Mc Call and Barack Obama (anyone see a pattern here?)- to advance her own career.
She told her staff that Bloomberg promised her two, four percent raises if she went into the tank.
Mulgrew, who is Bloomberg's water boy, is too afraid to challenge him on the raises.
Mulgrew could never articulate the issues they way Julie did.

Maybe you'll find some insight in this blog about the city's schools and reading.