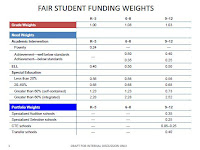 The mayor is due to announce his education budget tomorrow, Friday.  For the DOE fair student funding formula, see here.  The next PEP meeting (May 18 at 6:00PM at Long Island City HS at 14-30 Broadway in Queens) will apparently vote on it, but CEC's are also being provided with briefings in the meantime and allowed to ask questions.
1-    What is the base funding per student that schools receive, and how does that compare to last year and the year before?
2-    Why are elementary grade students funded at lower levels than middle and HS students,  especially when the class sizes  in these grades are supposed to be kept smaller?
3-    How is poverty defined – free or reduced lunch students or both?  And why isn’t there a separate standard for each, given their widely different income levels and challenges?
4-    Why are the selective specialized schools given more funding per student?  Doesn’t this lead to further inequities, given their lack of racial diversity?
5-    Why is there so much extra funding given to schools to push sped students into Collaborative Team teaching  classes, that often are far too large to meet their needs?  Is there any independent evaluation of NYC’s expanding CTT program to show that it is working?
6-    Is the DOE continuing to fund the cost of unfilled CTT and self-contained classes, or has this been option now phased out, forcing schools to implement maximum class sizes in these classes?
7-    Why is a good idea  through FSF to force schools with stretched budgets to choose between having experienced teachers and reasonable size classes – when these are the only two observable factors that  research has found so far to be  correlated with better student outcomes?
8-Why should schools be forced to pay the full cost for their staffing  at all, knowing that it gives them an disincentive to hire and retain experienced teachers?
9- If this is such a good system, why is it that police precincts or firehouses  aren’t forced to cover the full cost of their personnel, which would disincentivize them to hold onto experienced staff?
10. Is it true, as Randy Herman of the CSA recently testified before the City council, that because of budget cuts, schools are only being funded at 86% of what the formula requires, and DOE has  not fully funded FSF in years? If so, what does the DOE plan to do about this?
Budget cuts in general:
1-    Why are all the proposed major cuts coming out of school budgets, with few or none planned for the central or the expanding middle level bureaucracy, and none for the growing cost of contracts, technology and consultants?  What is  the headcount at central and at the CFNs, this year and last?  (according to the City Council, the projected central headcount for Fiscal 2012 is 2,097, 73 positions above the Fiscal 2011 level).
2-    Why is it okay to give a $4.5M contract to Joel Klein’s company, Wireless Generation?  Was this a no-bid contract and what is its purpose?
3-    How do you recommend that schools prevent further sharp increases in class size , given enrollment growth and repeated budget cuts,  even if this protecting class size is the top priority of their principals?  What is the administration’s goal as relates to class size reduction?
4-    How much are the Common core standards, PD, curriculum materials, and associated assessments going to cost the city, next year and in the years thereafter, in both operating and capital costs?
5-    What are the costs associated with the 16 new contracts being bid out for local standardized assessments, to be given four times a year, and out of which budget line is that coming out of?  And why are you contracting these out, if the UFT has not yet agreed to them?
6-    What is the $1.2 M contract for six months to “Infusion”, described as “Technology services in improving the web-based development tool "iPlan" that schools use to develop their Comprehensive Educational Plans?”  Was this a no-bid contract?
7.  What are the costs associated with expanding the Izone for next year and the year beyond?
8.  What is the total amount being spent on teacher recruitment, through the New Teacher Project, and otherwise, and why is this needed at a time of threatened layoffs?
9.  How much is being spent on outside contracts, consultants, and computer consultants, this year and planned for next?
10.  What is the city's Contract for Excellence plan for next year?
Posted by Leonie Haimson at 5/05/2011 03:04:00 PM

Another question is:
For the Special Ed Reform, there was funding for the schools in Phase 1. Will this funding be continued for fiscal year 2011?

Albert Einstein once said,. “The important thing is not to stop questioning."

The money being spent on testing and technology is outrageous. Nobody really knows how many administrative positions exist outside the schools.This needs to be addressed before we talk about eliminating ay teaching positions.

Where is the live blog from tonight's meeting? There seems to be a media blackout.