The mayor's choice: a budget which puts children last 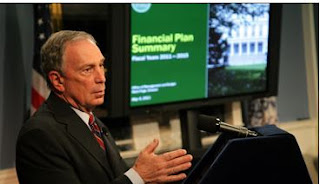 With his budget proposal this morning, the mayor tried to pass the buck today to the state and the federal government, blaming them for his proposal to eliminate over 6,000 teaching positions -- one twelfth of the teaching force ---larger layoffs than have occurred in more than thirty years.  What happened to mayoral accountability?
And yet he added that if the state provided extra funding or mandate relief, he would not necessarily restore teaching positions, but he might spend the money on the police or fire department instead.
Bloomberg said he was “very sympathetic” to Gov. Cuomo, but he mentioned no sympathy for NYC children, who will have to bear the brunt of these cuts in the form of the largest increases in class size in at least thirty years.  While he commented that he would not put city's fiscal "future at risk," he seems all too willing to put our kids' futures at risk instead.
At the same time he is slashing 6,000 teaching positions and doing irreparable harm to our kids, he is adding to the budget in other ways:

The Bloomberg administration plans to announce that it will open 10 new senior centers, each serving 250 to 300 people.

Already in the last three years, students in grades K-3 have experienced  class size increases of 10%; leading to the largest class sizes in over a decade.  More than a third of all Kindergarten students are now squeezed into classes of 25 or larger. Why should they have to suffer any more?  This is not a budget which puts children first. 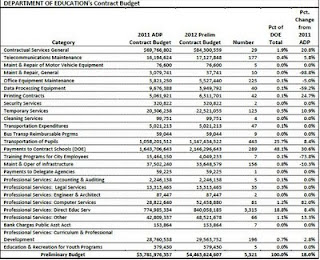 He offered not a single proposal to control the rapid growth in DOE contracts and consultants, amounting to  $4.5 billion for next year, an increase of more than $600 million from this year.  This $600 million increase  would save all our teaching positions and more.  (see chart to the right)
The rapid growth of these contracts and the DOE’s lax oversight has led to repeated allegations of waste, mismanagement and corruption, including more than $3 million in stolen funds from one DOE tech contract, and another tech contract that has gone tens of millions of dollars over budget, with reports that a high-level DOE supervisor had a personal relationship with the consultant.
Nor does he have any plans to cut  the growing headcount of the central and mid level DOE bureaucracies, but instead targets  all reductions to the classroom.
In the next year alone, the DOE plans to spend more than half a billion dollars on technology in its capital plan, with $350 million to buy computers to implement more online learning and testing.
Their ultimate goal seems to be depriving our students any contact with a real live teacher, but to put them all on machines instead.
The Mayor claims he has no choice, but this is yet another excuse for lack of leadership.  He has many choices which he refuses to acknowledge:
The wealth and share of income of the city’s richest one percent is still expanding rapidly, but the mayor chooses not to ask that they contribute their fair share. Though a millionaire’s tax on city residents would also need Albany’s assent, it would be a far better choice  than continuing to push the elimination of teacher seniority protections, which has little chance of being approved.

Let's be realistic here. A decade ago fresh on the ego ride of winning the Mayoral Race Mayor Bloomberg promised the public a better system. Unaware of the complexities of a public school system he hired Joel Klein, a monopoly breaker. Joel Klein proceeded to dismantle the system without really knowing what he was doing; calling it "reform" and hoping his new boss and the public would agree. For ten years this crowd has dismantled a system that needed improvement, but not dismantling. But, no one opposed it. Ten years later the children still can't read, can't do math and the National Scores prove it. Joel Klein, working for R. Murdoch scammed Bloomberg. R. Murdoch and Klein are laughing all the way to the bank.

Mayor Bloomberg was screwed by the very business people he trusted, but it was never about the children it was always about the Mayor's ego.

Mayor Bloomberg, why did you want to steal a third term?

What budget line does teacher salary fall under?

This is an outrage,but why would anyone be surprised. The mayor has cared little about the children or teachers in our public school system since he took office.. He is worried about his charter school friends and has done nothing but test,test,test while the children in this city fail to acquire the skills needed to actually succeed in college or in the future workforce.Next year when grades 3-6 have 32 children and K-2 have at least 25 you should know who to blame for this outrage. It is not Washington or Albany,the culprit is the education disaster,our mayor.

This is a wakeup call to everyone. There will be teacher layoffs every year.
The outsourcing of teachers is right at the doorstep of every classroom in New York. Teaching staff will be steadily replaced by computers and internet web instruction services which are contracted out to private companies that produce the hardware overseas and even service the website overseas. One senior teacher's salary is more enough to pay for 3 or 4 consultants overseas who replace 3 o 4 classroom teachers in US.
Please tell me that I am wrong!

Joel Klein is currently working on a web intruction site called K-12 that is associated with Newscorp.

If the layoffs do materialize, let's go to court and get an injunction against them. We shall state that fewer teachers shall provide for safety hazards for our darling children. The NLRB NEEDS TO BE CALLED IN AS THE MAYOR IS ENGAGING IN UNFAIR LABOR ACTIVITIES WITH HIS PLAN TO ABOLISH LIFO. Let's make use of the National Labor Relations Board!

End of LIFO-Who needs a union?That's what the mayor is gunning for. Senior teachers are the focal point of any school. They mentor newer teachers. If LIFO goes, you will see dismissals to save money AND people will be let go on the basis of race, religion and gender. I'm not kidding.

Just because Bloomberg could hide in his office on 5/12 doesn't mean he can or should evade responsibility forever in all venues.Make his Memorial Day weekend particularly memorable by coming out to the College Point Memorial Dat Parade in NE Queens(near the Whitestone Bridge, a Target/BJs shopping center w free parking) and lots of friendly folks) Sunday 5/29 @1PM starting @ College Point Blvd. + 26th Ave., proceeding N to McNeil Park.College Point was home to the dearly missed Helene Orenstein, who died while Mikey was checking on the state of his lootings in Bermuda during THAT snowstorm. Let's all us unbooted and horseless hoi polloi show him the great welcome to which he has proven himself eminently entitled!

To ignore children in a budget is not a good step.These children are the future of state.