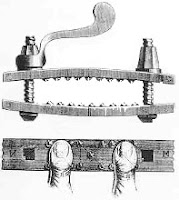 May 16, 2011 (GBN News): Emboldened by the NY State Board of Regents’ approval of a strict new teacher evaluation system, Governor Andrew Cuomo has decided to tighten the screws even further. In his second letter to Chancellor Meryl Tisch in as many days, the Governor thanked the Regents for their vote, but “strongly suggested” that they now consider upgrading to an even more draconian set of sanctions.

According to the letter, leaked to GBN News, firing teachers whose test scores do not measure up will be only the first step. If, after losing their jobs, their students’ scores do not improve, teachers will now be publicly humiliated by being tarred and feathered in public squares. Sources told GBN News that the Governor had actually considered having these low performing teachers run out of town on a rail, but was told that recent transit cutbacks would render that all but impossible.

One potential flaw in the plan was reportedly pointed out to Mr. Cuomo – that teachers cannot be held responsible for improving students’ test scores after they are fired. But the Governor was said to have termed this, “just another excuse by defenders of the status quo”, and pointed out the historical precedent of debtors’ prisons.

Andrew...shame on you. Here is another way to kill off the very generation that can save this planet.

No one will want to teach a grade involved in state wide tests.The politicians are killing off a noble profession,but what do they care,their children attend private school anyway.

I don't support the ides of humiliating teachers.