A disaster in the making: what will happen to class size if the mayor's cuts go through?

There's a good quote from Ann Kjellberg in today's NY Times about the mayor's proposed slash and burn budget cuts to schools:  "We feel like pawns in his political struggles,” said Ann Kjellberg, a schools advocate and the mother of a fourth grader. “He said he needs $300 million to save these jobs, and $300 million seems like an amount you could find if you looked hard.” 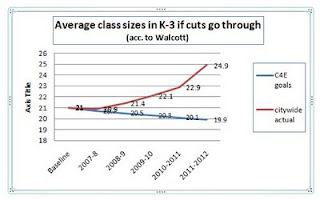 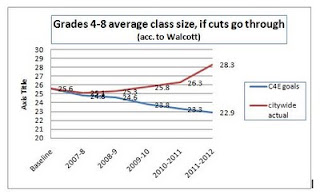 Also, Walcott now says class size will be raised by about two students per class – considerably more than his previous testimony before the city council of an increase of one to one a half students.  The UFT has predicted that these cuts would lead to an increase of  about three students per class.  To be conservative, I have prepared charts, showing what Walcott's prediction would mean in terms of average class size, compared to the goals the city made a commitment to achieve after the CFE/C4E  legislation was passed in 2007.

Ironically, the 2011-2012 school year was supposed to be the final year in DOE's state-approved C4E class size reduction plan; in which they promised to reduce average class sizes in grades K-3 to no more than 19.9 students per class;  22.9 in grades 4-8; and 24.5 in high school core classes. 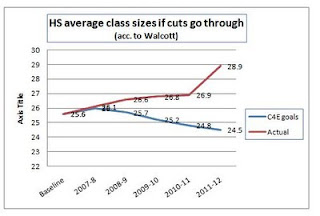 We will be further from those goals than anyone could have possibly imagined when the CFE case was settled, and far above what class sizes were in 2003, when the state's highest court concluded that NYC children were deprived of their constitutional right to an adequate education because of excessive class sizes. (In 2003, average class size in grades K-3 was about 21.6; and in grades 4-8 at 26.7; we had no reliable  data for high school).

Yet these charts are highly uncertain, and likely to reflect the minimum of what the actual effect may be. Remember that the distribution of class sizes across the city is very uneven, and more than half of all middle school classes and more than 60 percent of high school classes are larger than 28 students already.

Enrollment and classroom overcrowding is also increasing at the same time, the latter due to co-locations and school closings as well as growing enrollment.  All these factors also have a significantly negative impact on class size.

Already nearly one third of all Kindergarten students are in classes of 25 or more (at or above the contractual level); this percentage will likely rise next year no matter what happens to the budget, as evidenced by the fact that there are Kindergarten waiting lists at one fourth of all elementary schools.


Though I have no crystal ball and insufficient statistical skills to be able to model all these factors, I imagine than many if not most NYC schools will be forced to increase their class sizes  to the UFT contractual levels next year if these cuts go through:

• 25 in kindergarten
• 32 in 1-3 grades (for many years, the DOE and the UFT had a “side” agreement to keep class sizes to 28 in these grades, which they are no longer honoring)
• 32 in 4-6th grades
• 30 in Title I middle schools
• 33 in non-Title I middle schools
• 34 in academic classes in high school
•50 for PE and music in middle schools and HS
The struggle for principals to keep class sizes reasonably small is is also complicated by the so-called “fair student funding” scheme, which DOE imposed in 2007.  Among its many flaws, it forces principals to cover the the entire cost of their staffing, does not ensure that there are enough teachers to meet even contractual levels, and has itself been severely eroded by repeated city budget cuts over recent years.
Walcott concluded this way: ““All schools will feel this one way or the other,” he said. “We have to manage this, and manage this very well.”

What does this mean?  How can a school "manage" class increases this large?  Whatever the particular increases turn out to be, these cuts would likely be a disaster for NYC children and their opportunity to learn, and must be prevented at all costs.

Unfortunately, I suspect it will be worse than you predict. For one thing, there is absolutely no way cuts will be uniform. Tweed doesn't plan that way, or likely at all. For another, many, many schools have plenty of classes already at maximum.

If reduced class sizes are legally required as a result of litigation and legislation, isn't there any legal action that can be taken to enforce those requirements?

Anyone is free to take any legal action any time, but it might take a few years for the case to be resolved by a court decision.

This mayor could give two s_ _ts about class size. Many of his preferred experts claim it does not impact education. While you are correct, the fact is this mayor along with many like minded education reformers want to shrink the teaching ranks. The teachers are one group that are politically active and vote their own interest. This budget is another attack on unions and voters who by in large vote democrat. If really large numbers of protestors show up on May 12, the local pols will take notice then maybe the mayor will be forced to compromise. I do not believe that will be the case.
Retired but still kickin!

I believe The huge layoffs the mayor predicts will not take place. The enormous protest will force our mayor to discover funds that will miraculously save most of the teacher's jobs. He will then take credit for this job saving move.
Our mayor is very anti-UFT and public school teachers.
Dennis Walcott is no more than the mayor's puppet and could not care less about the children or teachers in our public schools.He is only there to cook waffles,attend parties and spout the mayor's nonsense.We must get politically active against all those who back the mayor and his ridiculous educational policies.

Meanwhile there has been no confirmation at the level of the schools involved that the City has applied for the millions in School Improvement Grants for which the application is due today.

I believe you are missing the nuances of the class size argument. The numbers you give are not firm, but soft. Class sizes can grow to one less than another half a class worth. In other words when it says 32 students in grades 1-3. It really means 32 + 15 that equals a real class size limit of 47! My numbers are if there is only one class. However I believe how it works is you add up the students above the limit between all the classes in the grade and if they add up to 16, then your Principal is supposed to open up another class in that grade. Therefore the more classes in your grade the better for your class size.

class sizes in my daughters middle school are at 34. Next year they could be at 36 or even more! Parents and students have to make their feelings about this mayors policy known and the mainstream media must stop praising him, constantly referring to his so-called success.