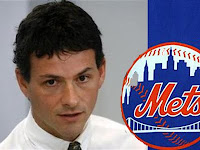 May 26, 2011 (GBN News): Long suffering Mets fans may finally have found their knight in shining armor, when it was announced today that that hedge fund manager David Einhorn will be buying a substantial minority stake in the team. Mr. Einhorn, a member of the Board of Advisors for Democrats for Education Reform (DFER), told reporters that he will use his leverage to “turn around” the team using the same reform model his organization champions in the nation’s schools.

While Mr. Einhorn did not give any hint as to precisely what changes he will push for, GBN News has obtained a copy of the proposal he had presented to the Mets’ principal owner, Fred Wilpon. Highlights of Mr. Einhorn’s reform ideas, as gleaned from the proposal, are:

Given that the “traditional baseball manager” simply maintains the “status quo” in the sport, the team will lobby Major League Baseball to partner with philanthropist Eli Broad in setting up a “Managers’ Academy”. Based on the premise that “a good manager can manage anything”, the Academy will train managers from the business and legal fields to transfer their skills to directing a big league club.

In what one might think would be the most popular reform with fans, the Mets will immediately release half the team. However, the players slated to be fired will be the most experienced team members. To replace them, new players will be recruited through another initiative, “Play for New York”. Top high school and college graduates, whether or not they have ever played baseball, will be recruited from around the city, and after a six week training period, will join the major league club.

Most of the new players are not expected to last more than a year or two, but their sports experience will be a great resume builder for graduate school or positions in business, law, and other top fields. And, the team will save a substantial amount of money by keeping the payroll down to the big league minimum. The Mets will also save by dispensing with most of their farm system, since players will no longer need the years of training that the traditional minor leagues had provided.

Arguably the most important reform proposed would be the “value added” method of evaluating the success of the players and the manager. Through a grant from the Gates Foundation, a rating scale will quickly be developed so that by July 1, players would be expected to make what is termed “adequate daily progress”. If a player’s statistics do not improve over a three day period, the player will be released. Injuries or other factors such as not being in the lineup that day will be no excuse; players will be expected to perform.

The manager, too, will be held to a strict “value added” standard. If the team does not make “adequate daily progress”, the manager will be fired. However, if he is a “Managers Academy” graduate, he will be given a raise and moved into an administrative position.

When reached for comment by GBN News, Mr. Einhorn would not publicly confirm or deny any of the above plans. But in response to a question as to whether the Players Association would accept the new reforms, he said, “If the union doesn’t accept what we do, we’ll just threaten to move the team to New Jersey, where Chris Christie can just ‘take the bat out’ on them.”

Well said. Tongue firmly in cheek. Sadly, idiots will still believe in trouncing experience so they can pay less. Quality is irrelevant to these slimebags.

Yes, but Gary, the new recruits will be so idealistic and innovative while the veteran players who have lost their love for the game are just going through the motions because they have long term contracts.

Excellent! Of course a lottery will be held to determine who can play on the Mets.Tests will be given every three weeks and the manager will be fired if improvement is not seen after hour after hour of test prep in the fundamentals of baseball. Just another reason to be a Yankee fan.